Athletics at the University of Toronto

The University of Toronto has a long and notable history of athletic achievement. That of the men is more prominent for they had a head start in years and have for most of the period received much greater financial support and publicity. The women have had to struggle for much of the University's history against inadequate facilities and funding. Only recently has women's athletics come into its own, with equitable funding and considerable interest and support from the public.

The early years of athletics on campus were marked with primitive facilities and no formally organized athletic programs. By the 1890s the situation for male students had greatly improved. 1893 saw the opening of a first-class gymnasium (the University's third, but the first to be designed as such and properly equipped), the establishment of the University of Toronto Athletic Association to govern athletic programs, and the appointment of the first athletic instructor, A. C. (Casey) Williams. The position of physical director, to co-ordinate athletics and physical training, was added in 1907.

In contrast, the first athletic facilities for women consisted of a small and immediately inadequate gymnasium in the southeast tower of University College that opened in 1901. Victoria College made do with an ill-ventilated basement gym while the women at Trinity had use of the College gymnasium. Each of the colleges had its own athletic club that worked in conjunction with a programme in physical culture that consisted of "dumbbell exercises, club swinging, fancy steps and marching". This combination was designed to give every woman an opportunity to satisfy this need of systematic regular exercise and to help make her physically efficient to fulfil life's duties." The Toronto University Women's Athletic League, formed in 1905, helped foster an interest in athletics and competition between the colleges. There was a woman instructor was in physical culture at each college, while Williams taught fencing at UC.

By the first quarter of the twentieth century there was a myriad of athletic activities on campus, many of which did well in intercollegiate meets. Amongst the men cricket enjoyed a brief revival but, along with baseball, suffered because it was played during the summer months. A rowing club was established in 1897 and briefly flourished, a forerunner to its revival in the 1920s. Basketball as an organized activity dated from 1908 and attracted considerable interest until the War. Lacrosse, tennis, assault-at-arms (boxing, wrestling and fencing), golf (while the course existed) and gymnastics also had their enthusiasts. Rugby football was the premier spectator sport (Association and English rugby football also had strong followings) with hockey gaining rapidly in popularity.

A boxing match in Hart House, ca. 1950. The names of the contestants are not known, but one had a very sore jaw afterwards.

Amongst the women basketball and tennis ("especially among those do not indulge in the more strenuous sports") were the earliest games played in intercollege and inter-year competitions. From 1909 the women at University College benefitted from weekly access to the men's gymnasium to play basketball. Golf was instantly popular and field hockey had a loyal following, especially at Victoria College. Fencing and gymnastics first gained adherents at University College where they had access to facilities and training. In the early 1900s, ice hockey became perhaps the most popular sport in all three colleges and today has perhaps the strongest history of excellence. A swim club formed at University College in 1909 attracted sixty participants in its first year but had to use facilities off campus.The only pool on campus was in the Lillian Massey Building, completed the same year, but it was too small for many events (it was immediately dubbed the 'bathtub').

“Varsity ’11” calendar, 1911.  The U of T Rugby Club produced this souvenir calendar to raise funds for its 1911 season.  The face is that of Hugh Gall, captain of the 1910 intercollegiate and Dominion champion rugby team and the outstanding half-back of his time.

Rugby football grew quickly in popularity after the senior team won the first Canadian intercollegiate championships in 1898. But seating was limited and by 1909, when Varsity won its second Dominion championship and the first Grey Cup, the games had been played in Rosedale for several years. In 1911 the University built a 11,000 seat stadium which was finished in time to accommodate the capacity crowd that cheered its team on to victory and the University's third Grey Cup under the leadership of Hugh Gall and Jack Maynard, the captains in 1910 and 1911 respectively. (Gall has been described as Canada's greatest half back of the period and Maynard as one of its greatest backs).

Cushion cover for games in Varsity Stadium, 1911. Cushions were used to ward off the chill of cold seats   during football matches in the newly opened Varsity stadium. The Rugby Club sold cushion covers as a  fundraiser and souvenir.

Rugby football Dominion championship, 1910. Jack Maynard, captain of the 1911 rugby team, has just kicked a very difficult goal against the Hamilton Tigers on their own grounds on 26 November.  Hugh Gall had placed the ball in position for the kick.  Varsity won, 16-7 and claimed its second Grey Cup.

University of Toronto rugby team, 1894. D. Bruce Macdonald (in the bowler hat) was secretary of the Rugby Club.  In addition to the traditional complement of players from University College, this team included some from medicine and the School of Practical Science, but none from Victoria College.

A hockey rink had first been made on campus in 1892 to accommodate the University of Toronto Hockey Club, formed the previous year. From 1897 the campus was flooded each year with rinks, attracting large numbers of skaters of both sexes and more interest in hockey. The donation of the Jennings Cup in 1898 provided an impetus for interfaculty men's teams. Varsity intermediate and senior teams began regular intercollegiate competition in 1902 and in 1908 the senior team achieved a first by winning all the available competitions City, Intercollegiate and the Amateur Championship of North America.

In a brilliant decade of hockey following the First World War two achievements stand out. The first was the winning of the Allan Cup in 1921.The two wings, George Westman and Frank Sullivan, were also members of the football team that had earlier brought home the Grey Cup, perhaps the only students ever to play on championship teams in different sports in the same year. In 1928 Sullivan joined most of his fellow teammates from 1926-1927 to play forward with the team representing Canada at the Olympic Games. With a tally of 38-0, they brought back the gold medal in triumph.

The opening of Varsity Arena in 1926 was a boon to the game and hockey has remained a popular sport. With the founding of an international collegiate league in 1936, play against American teams became a regular feature. Thirty years later, in 1968, a historical footnote was recorded at a game between Varsity played Cornell - the opposing goalie was Ken Dryden.

Women's hockey began with informal games first being played in the late 1890s. Organized competition between the three colleges began in 1901, but no championship was held until 1908-1909, when a cup was donated and presented to the University College team (St. Hilda's won it for the next three years). The Varsity acknowledged the popularity of the game in January, 1910 by publishing a photograph of the University College team, the first time an image of a women's team had appeared in that paper. As finances were always a major issue with intercollegiate games, only the occasional game was played against teams outside the University until after World War I. Regular games against McGill and Qyeen's began in 1921 but the former dropped out after four years and Queen's in 1935. In 1924-1925 the Varsity team entered the Ontario Ladies Hockey League and won all its games and the Ontario championship. One of the stars of this team was Marion Hilliard.

The University of Toronto sent a rowing team to the Olympics in 1924. The club had been revived in 1919 by men returning from the War and in a short time it was producing local champions. The 8-man rowing crew that went to Paris "was entirely a University of Toronto accomplishment. The coach, crew, equipment and facilities were all our own. In just four years the UTRC had grown from nothing to a producer of world-class oarsmen with their own shells, boathouse and university funding." The team was trained under the expert eye of T. R. Loudon and, though it lost to Yale, the resulting impetus boded well for the future. In intercollegiate matches against McGill from 1925 until 1936, Varsity won all but the first two. McGill then disbanded and rowing did not appear again as an intercollegiate competition until the 1960s.

First gymnasium, 1866. Pen and ink sketch by W. J. Loudon of the first gymnasium at University College. It consisted of a shed made of planks, with very rudimentary equipment. Note the styon the far end, in which the Residence gardener kept his pig.

The first women's rowing crew appeared in 1974 but the Argonaut Rowing Club, which provided the facilities, objected to their presence and excluded them until 1980. Women's rowing was established as a team sport in 1978 when the circulation of a flyer revealed a huge, pent-up demand. Within a year the women were winning competitions at the Royal Canadian Henley Regatta and a decade later Olympic-level competitors were emerging. Kay Worthington won two gold medals at Barcelona in 1992, while Emma Robinson was a sliver medallist in Atlanta in 1996.

Beginning in the 1919, the men had access to the newly opened Hart House, built by the Massey family at a cost of $2,000,000.The old gymnasium, located on the site of the north wing, was torn down and replaced by new facilities that included expanded gym facilities, a swimming pool and a new indoor running track. For years this track was the only such facility in Ontario. It was used by Bruce Kidd when he trained for the Commonwealth and Olympic games in the early 1960s, but when Olympian-to-be Abbie Hoffman tried to sneak in and use it a few years later she was turfed out. (The deed of gift for Hart House forbade the permanent allocation of space for women, a restriction not lifted until 1972.) Women were, however, allowed to use the gymnasium and pool for intercollegiate events, intramural swim meets and basketball finals.

Bruce Kidd running at an international track meet in Maple Leaf Gardens on 25 January 1963. Bruce Kidd ran a three-mile race against Brian Craig and John Snowdon from England. This photo was taken as he lapped Craig. 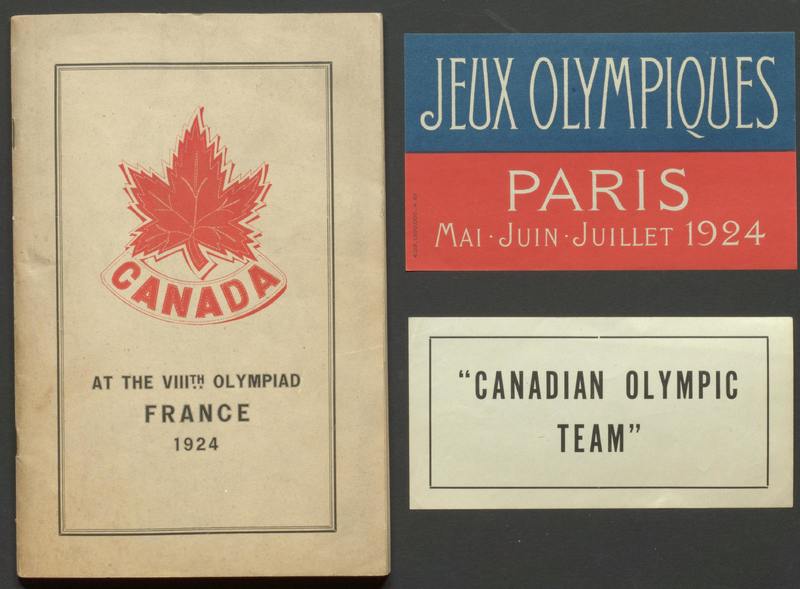 Memoribilia from the 8th Olympiad, Paris, 1924.

The three items displayed here consist of two labels and the commemorative booklet compiled by the Canadian Olympic Committee after the games.