Athletics At The University of Toronto (con't)

The lack of adequate athletic facilities for women was an issue throughout the twentieth century; the problem of sufficient changing facilities has only recently been resolved. After the completion of Hart House, the Massey Foundation set aside $125,000 for a "women's building". Sketch plans prepared by Adrian Barrington of the Department of Architecture in 1921 started a thirty-five year discussion between the Women's Building Committee and the University administration, marked by frustration for the former as action was delayed by the latter. New plans drawn up in 1925 and again in 1936 came to naught; apparently there were not sufficient funds. Hopes were raised in 1939 when Sir Joseph Flavelle willed his residence, 'Holwood' (now Flavelle House) to the University for use by women students and staff. They were dashed, however, as the building was used for other purposes when war broke out and not returned to the women afterwards. In 1955 a women's athletic centre designed by Eric Arthur's firm was finally promised, but the site was changed and construction did not start until 1957. The Benson Building finally opened on 30 October, 1959.

After funding the construction of Hart House (at $2,000,000), the Massey Foundation set aside $125,000 towards athletic facilities for women. This sketch by Wellesley McConnell and Adrian Barrington, architecture professors, for a gymnasium on Devonshire Place was the first of several proposals that came to naught. 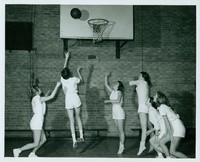 Each year of the women’s Physical Health and Education program fielded a basketball team. In this photo, Jan (Thayer) Tennant (2nd from left) is attempting a basket. The game is being played. 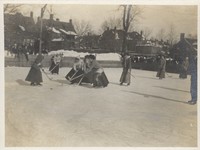 The University College team played against teams  from Victoria and Trinity.

Much more protective gear is worn by goalie  Phyllis Hart than by her counterpart in 1911, Ethel Parmenter Sutherland. 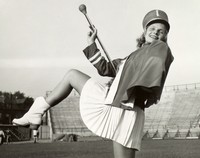 “Our Hilkka” (to her fellow students at Harbord  Collegiate) was an outstanding physical education student (PHE 1951) and the leading drum majorette of her era. 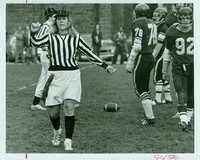 Piret Komi signals a first down in an intramural  football game in October, 1975.  She and fellow PHE student, Viive Taam, became the first female referees in the history of intramural football competition the previous season.