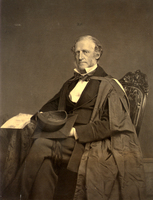 Chairman of the Building Committee and Auditor-General of the Province of Canada. Referring to attempts by President McCaul to interfere in the design and construction process, he wrote, “I have got absolute power here...[and] I will keep it.”

Appointed architect of University College on 7 February 1856. His partner was William Storm, a brilliant artist and accomplished draugtsman, who refused to provide his drawings for the building of the College after the fire of 1890.

Professor of History and English Literature. He was, along with Henry Holmes Croft and others, a member of  the advisory committee to the Building Committee. Some of his suggestions were incorporated into the design of University College.

First page of the indenture of the building contract

Includes specifications for the construction of the foundations. 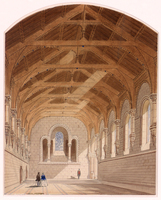 The east wing of University College, north of the central tower, originally housed Convocation Hall. This perspective, looking north, was drawn by W. G. Storm. It has a number of attractive architectural details that were, to keep the structure within budget, stripped away in the final design.

This image, having belonged to John Langton, was taken early in the summer of 1858. It shows the completed Chemistry Laboratory (then being used as the architects’ office), with the west end of the south wing being roofed. 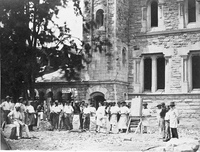 Stone-carvers pose in front of the arcade at the west end of University College in the summer of 1858. The bare-headed man in line with the portal is thought to be Charles Emile Zollikofer, the young master sculptor. To the left in the stovepipe hat with his elbow on his knee, is W. G. Storm. Cumberland stands on the extreme right with his hands behind his back.

Daniel Wilson’s copy of the report that Egerton Ryerson hoped he could use to destroy the University of Toronto, but failed. It makes fascinating reading for anyone delving into the personalities and politics behind the construction of one of Canada’s great public buildings. 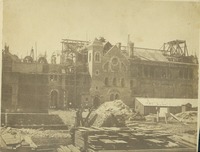 Quadrangle of University College under construction.

This view of the south side of the quadrangle, taken in the summer of 1858, show the rafters to the museum partially in place. Construction has begun on the section east of the central tower, the upper floor of which would house the University library.

Image shows the front side of the south wing east of the central tower in the summer of 1858.  Carving was done under cover in the construction shed.  Some wooden centrings for the library windows have been installed.

On 1 January 1850, the University of Toronto arose like a phoenix from the ashes of King's College, complete with its endowment and most of its teaching staff, but with no building to call its own. This was remedied in part by the construction in 1850 of a white brick building, later known as Moss Hall, for the medical faculty. The rest of the University had to make do with shifting makeshift quarters for several years as the fledgling University was buffeted by the political manoeuvring and space requirements of the government of the Province of Canada.

The physical presence of University College still dominates the central campus, in spite of recent additions of massive modern buildings such as the Medical Sciences Building. In 1856, however, there was no assurance that it would survive. The building committee established by the Senate of the University consisted effectively of one man, John Langton, the auditor-general of the Province of Canada, aided by an advisory committee that included Daniel Wilson, the newly-appointed professor of History and English Literature, and the aforementioned Henry Croft. This was a vigorous group of men in their prime and with wide expertise. Langton was the oldest at 48 and Croft the youngest at 35. The 40-year-old Daniel Wilson,' a self-taught antiquarian and an expert on the architecture of old Edinburgh, furnished drawings for many of the building's architectural details, the great double-lit window in the tower, and the three finials on the corners of the tower which balance the turret at the northeast corner.

The ongoing feud with the denominational colleges over the endowment and their resentment over the magnificence of the structure itself - the original appropriation was £75,000 for the building and a further £20,000 for the contents of the Library - meant that the cornerstone was laid in secret, with only the above three men present. Even with the official opening of the College two years later, John A. Macdonald's wry comment that 'even Methodists cannot steal bricks and mortar, was almost proved wrong. Egerton Ryerson and his allies in the Methodist cause made a concerted effort in 1860 and again in 1863 to do just that and their successors very nearly succeeded a generation later during the discussions leading to University federation.

The construction of the building itself was not without controversy, at first over the design and later over costs. The architect, Frederic Cumberland, had already made his name locally with St. James Cathedral and the Toronto Mechanics Institute. He also designed the Toronto Magnetic and Meteorological Observatory, relocated in 1908 to its present site in front of Hart House. His initial proposal for a gothic building was overruled by the Governor General who wanted an Italian design, of which Langton's considered opinion was 'if he were not Governor General and had written a book on art, I should have called one of the ugliest buildings I ever saw.' Head then suggested a building in the Byzantine style and he and Cumberland

'concocted a most hideous elevation. After this the Governor was absent on tour for several weeks during which we polished away almost all traces of Byzantine and got a hybrid with some features of Norman, of early English, etc. with faint traces of Byzantium and the Italian palazzo, but altogether a not unsightly building and on his return His Excellency approved.'

Langton controlled the project's purse strings, and was constantly on guard against any unnecessary extravagances. Detailed specifications were drawn up, revisions to the drawings were ongoing and only those signed both by Langton and the contractor, John Worthington, were used in the construction. From the beginning, the project faced cost overruns, so it was proposed initially that Convocation Hall and the 'Chemical School' be eliminated and that cheaper materials be used where possible in the main building. While both edifices were eventually retained, Langton and Cumberland soon quarrelled over the chemistry laboratory, the first structure erected specifically for that purpose at a Canadian university. As envisaged in the original design, it would be a round stone building that would anchor the western end of the front elevation. The Building Committee, in the interests of economy, decided instead on a "plain brick building in the rear, but their plans were defeated by finding the present building far advanced; the Architects having ordered this in express variance with the instructions of the Committee, and proceeded with it as the earliest portions of the buildings." Cumberland had taken advantage of a temporary absence by Langton to maintain the integrity of his design and to provide himself with an office while the rest of the building went up.

Langton was furious and rode herd on Cumberland for the rest of the project. As a result, the plans for the West Wing (the residence), prepared in January 1858, were to "omit all unnecessary ornament, and to design this portion ...on the plainest and most economical plan consistent with its relation to the main building." The Dean's residence as originally envisioned was omitted and built instead into a portion of that wing at the expense of rooms for students. Convocation Hall was eventually constructed in the East Wing at a cost not to exceed £5,000, with the elimination of certain architectural features - including a lantern in the roof and a window gallery at the north end - and much of the envisioned ornamental detail. The omission of a proposed residence for the president of the College removed the need for a cloister along the courtyard side of the hall. University College still cost more than the original estimates due, in large part, to unavoidable changes in the design of the building as construction proceeded.

← King's College
The Professoriate At Play →
Building a College