In his memoirs, President Claude Bissell remarks that the years immediately before 1967 "were the final period of the old feudalistic university that was based upon certain rigid assumptions that went unquestioned." One of the assumptions was that financial and academic spheres, as represented by the Board of Governors and the Senate, should be kept separate. Another was that the "students were not active participants in the running of the university; it was their happy lot to receive and enjoy what had been decided for their benefit." Both of these assumptions, and many others, were about to be challenged.

There is a public perception that the 1960s was all student revolt but, even at the University of Toronto this was far from being the case. The rise of "student power" came late in the decade. The first rumblings were felt in 1965 with a protest against Adlai Stevenson, the American ambassador to the United Nations, receiving an honorary degree. Student activism took off in 1968 as opposition to the Vietnam War heated up with a concurrent questioning of authority. Certainly, the students had an enormous impact as the orderly governance of the previous decade was disrupted by student demands and changed forever by increased student participation in various administrative and academic bodies. But it was not just what was happening at the U of T that facilitated change. Bissell noted, for example, that it was the deficiencies he observed in the bicameral governing structure at Columbia University during student anti-war protests there that convinced him the U of T should adopt a unicameral system to replace the Senate and the Board of Governors and involve students in the process. Nor was Bissell particularly upset by the decline in deference per se; what saddened him was the loss of civility that accompanied it and the tendency of many students to ignore reasoned argument.

The stage for the changes in the late 1960s was set a decade earlier as the administration began planning for the impact of the post-World War II baby boom. It determined that the student population would rise rapidly in the 1960s and, unlike the spike after World War II, would not decline. The university faced two major tasks: the massive expansion and upgrading of the university's physical plant and the hiring of a large number of new faculty. With Canadian universities not producing enough graduates, many of those hired would come from abroad, especially the United States, and they would bring new experiences and new ideas. Maintaining the status quo was neither possible nor desirable.

The ‘Old Red Skulehouse’, 1967. To make way for the Medical Sciences Building,three buildings – biological, medical and engineering –were demolished.  The oldest, dating to 1878, was the School of Practical Science, later the Faculty of Applied Science and Engineering. This is what was left of it in January, 1967.

The province allowed the University to expand beyond St. George Street to Spadina Avenue, with the result that the physical focus of the University changed as the University underwent a massive construction boom. It was a case of out with the old and in with the new. To the west of St. George Street new buildings were erected for the Faculty of Arts and Science, zoology, chemistry and physics. At the end of the decade the towering and controversial John P. Robarts Humanities Research Library rose at the corner of Harbord and St. George. East of St. George the process was repeated for the Faculty of Music and for graduate students (Massey College), while the old physics building was taken over by engineering, to which the Galbraith building was added. Between 1966 and 1970 several venerable buildings that had helped define the campus for three generations or more - chemistry, engineering, biology and medicine - were demolished. The last three were replaced by the massive Medical Sciences complex that also sprawled over most of the green space in that part of the campus and across part of Taddle Creek Road. There were more official openings of buildings during these years than at any time before or since in the University's history.

Robarts Library under construction, ca. 1969. This pen and ink sketch by Leslie Sirluck includes such venerable businesses as Macdonald’s Drug  Store, where many students earned a little extra money.

Added to this heady mixture of architectural styles (some of them disliked) was a massive expansion of and many changes in the academic structure of the University. Two new undergraduate arts colleges - New and Innis - were added to the campus and two satellite campuses - Erindale and Scarborough - were carved out of farmland on either side of Toronto. Numerous institutes and centres were also created, one of which, the Centre for Culture and Technology headed by Marshall McLuhan, probably raised public awareness of the University more than any single event since the discovery of insulin. To accommodate demands for new fields of knowledge and different ways of delivering it, existing academic programs were revamped, some old empires disappeared and others, such as medicine, were greatly expanded. The Faculty of Arts and Science underwent a major curriculum review headed by Brough Macpherson; one of its recommendations was phasing out of the honours system.

The staid acceptance of the status quo by students in the 1950s could not survive the physical upheavals and intellectual ferment on campus, the riot of Canadian politics, the raised expectations and boundless optimism epitomized in Expo '67, and the spread of the counter-culture with its anti-establishment bias. In the late 1960s, the New Left upsurge made its presence felt on campus (often in ways that alarmed both the administration and the faculty). What began as a broadly based student activist milieu gradually devolved into smaller, more radical formations including the New Left Caucus and the Worker Student Alliance.

Stephen Langdon, president of the Students’ Administrative Council [SAC], debates President Claude Bissell before about fifty students in front of Hart House, the day before the 203rd Hart House debate. 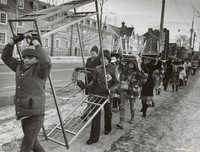 As a part of the official opening ceremonies of the permanent home of Innis College on 9 January, about 150 students, staff and alumni, accompanied by the Lady Godiva Memorial Band, carried pieces of light office furniture the two blocks to the new building.

The president of the University was usually a target in any student float parade. Dr. Bissell received particular attention from the Dentistry float in 1968, where he is depicted “ordering the harsh punishments being inflicted on blackface ‘students’ by Ku Klux kolleagues”. The issue was the review of the role of the disciplinary body, Caput. 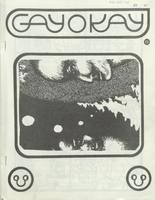 January 1971 issue of its occasional newsletter, Gayokay. The first of the gay liberation movement groups in Canada, UTHA was founded in October, 1969, with Charlie Hill as president. 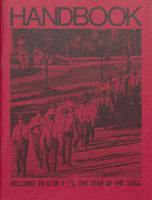 This was the handbook distributed to students in the fall of 1971. The image on the cover shows the Metropolitan Toronto police being called onto campus by Acting President Jack Sword to evict the inhabitants of Tent City (Wacheea) in July that year.

This forum was organized by the U of T branch of  the Waffle Movement and held in Convocation Hall. Labelled a “teach-in” in the Varsity, its reporter recorded the clash between Morin and  Broadbent over whether Quebec could solve her issues within Confederation.

The Union’s course evaluation was one of of many conducted throughout the U of T that, along with anti-calendars, provided students with evaluations of programmes (and professors).