Fewer issues were more controversial than this one, for it affected all students and caused tensions also between the University administration and the faculty. This report in the Varsity is the first indication that Simcoe Hall is about to cave in to the students’ demands.

Other forms of protest on campus included Tent City (of which there were three between 1968 and 1971) that highlighted a shortage of affordable housing. Simcoe Hall, the central administrative building, was briefly occupied in the spring of 1970 by the campus women's liberation movement to demand daycare facilities. Two years later hundreds of students again occupied it over undergraduate access to the stacks of the new Robarts Library (forcibly evicted, they increased their demands), an issue that also raised tensions between the faculty and the administration. Through the 1970s narrowly based groups, such as Students for a Democratic Society, continued to raise issues like racism and job protection for University staff.

The students, in their extra-curricular activities, reflected this change in attitudes. Interest in established sports, especially football, declined in the late 1960s and few female students now aspired to be a drum majorette, a mark of honour a decade before. Homecoming parades were still popular, but now they were a venue for much sharper commentary than before, more of it directed at the administration. The Varsity documented these changes in its columns, and other journals appeared on campus, full of new ideas and often daring writing. The coverage of the appearance on campus in March 1968 of the Beat poet, Allen Ginsberg, demonstrates very clearly the changing times.The reporter targets an up-tight Pierre Berton as the establishment fall guy and writes openly about sex, drugs, and homosexuality. Another Pierre, about to become prime minister, had recently argued that the state had no business in the bedrooms of the nation and had moved to legalize same-sex liaisons between consenting adults. In October, 1969, shortly after the act was proclaimed, a number of staff and students formed the first openly gay group in Canada, the University of Toronto Homophile Association, with Charlie Hill as president. Such actions were unthinkable even a few years before. The University had indeed moved on. 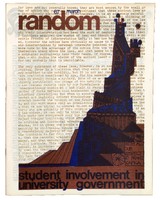 This publication by SAC reflects two aspects of student life on campus – the demand to be involved in those issues of governance that affected students and the impact of the counter culture. 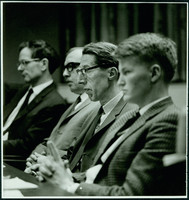 This photo, taken in December 1966, is of thefirst public presentation of briefs to the Committeewhich was charged with revising the curriculum of the Faculty of Arts and Science.  The chair, Brough Macpherson, is seated in the centre. Photo by Jack Marshall. 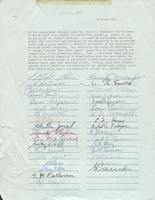 The faculty reacted with anger and alarm to the developments described in the Varsity and circulated a petition that received 259 signatures (not the thousands alleged by some commentators). A similar petition was circulated amongst the  Library staff.

Allen Ginsberg’s performance before a packed audience in Convocation Hall in March 1968 epitomized how much society was changing. The Varsity’s reporter had a field day describing the event and Pierre Berton’s discomfort.