King's College faced many conflicts and challenges over its twenty-three yearsas a legal entity and its short period (seven years) of existence as a teaching institution. These arose from the conflicting interests of imperial and local officials, of local religious bodies, and of the University officials themselves.The most contentious issues were the control of King's College by the local Anglican establishment and the preferential treatment it was accorded in itscharter by being granted 226,000 acres of crown land, from the sale of which it was to obtain revenues to open and run the University.

While the endowment was shared with Upper Canada College, the other religious denominations - the Methodists, the Presbyterians and the Roman Catholics - were excluded. These denominations soon established their own colleges and continued to campaign against King's. Although the College was replaced by the University of Toronto in 1850, the denominational colleges did not win the battle over the endowment. It was transferred to the new institution and continued to be a source of irritation for the next forty years.

These political battles delayed real progress on the opening of King's College until the early 1840s. It was due to the initiative of Sir Charles Bagot, the Governor General appointed in 1842, that the College opened at all. John Strachan, the moving force behind the granting of the charter to King's in 1827, proved an impediment as Bagot pushed forward with the hiring of the professorate. Strachan did not want John McCaul, then the principal of Upper Canada College, to be president, arguing that the post should be given to an Englishman (McCaul was Irish). Bagot, who was dying, would brook no delays and the College opened for business on 8 June 1843.

The College, however, proved a much less grand affair than initially envisioned and promoted in the public spectacles of the laying of the cornerstone and its official opening. Due in part to mismanagement by the College council, there was a chronic shortage of funds. Strachan himself borrowed £5,250 which he paid back only in part and the sale and leasing of land until 1839 was handled by a bursar with no accountancy skills and an astonishing naivete in conducting the business of his office. Only a portion of one wing of the two authorized by Bagot was ever built. Located on the site of the present Legislative Buildings, it was used as a residence, while courses were conducted in the temporarily unoccupied legislative buildings on Front Street that were refitted at a considerable expense to the College.

John Strachan obtained the charter for King’s College and was its president from 1827 to 1847.

The curriculum was also much narrower than envisaged by the council in its more imaginative moments. Certain chairs - agriculture, architecture, civilengineering, geology, mineralogy, music, painting, and political economy were never filled. While some were ahead of the current needs of the province, others would have been of immediate benefit to it. Agriculture, for instance, was promised to George Buckland, a prominent English agriculturalist who was enticed to come to Canada in 1847, but he did not receive the appointment until 1852 after a chair was created at the University of Toronto.

Announcement of lectures by George Buckland (1805-1885) to the Cranbrook Agricultural Association, 1846. Buckland was appointed to the chair of agriculture at the University of Toronto in 1852.

The quality of the faculty varied for it proved difficult for Bagot to obtain the first-class men he sought. One of its most progressive members was the young German-trained chemist, Henry Holmes Croft, who found in W.C. Gwynne, the Trinity College, Dublin trained professor of anatomy and physiology, an ally to challenge decisions of the Church-dominated council. Perhaps the least popular was James Beaven, professor of ethics, whose tetchy personality and dry lecturing style did not endear him to his students (his eventual retirement in 1871 was due in large part to student displeasure). James Murray, professor of mathematics and the first 'political' appointee to thefaculty (he vacated his position as superintendent of education in favour of Egerton Ryerson), is memorialized in a bit of doggerel from a student song:'Here's to the professor of dull mathematics; he know more about steaks than he does about statics'.

In 1848, with the election of the second Baldwin-Lafontaine government, the fate of the College was sealed. The residence, which had consistently lost money, was closed at the end of 1848. An act abolishing the College and replacing it with a non-sectarian University of Toronto was passed in May 1849 and the premier, appointed a commission of enquiry (the University's first) into its affairs. During the course of the summer a local observer wrote, "the Buildings occupied by King's College classes are to be converted to Public offices & Legislative Assembly House and the Museum & apparatus is in course of removal. I obtained an introduction to Dr. McCaul. ..and such of the confused debris of the Collegiate establishment as remained he kindly showed me."

Sketch of King’s College Residence by Catherine Beaven. Daughter of James Beaven, Professor of Divinity and Dean of Residence. The only building erected for the College, it stood on the site of the east wing of the present legislative buildings and was torn down in 1886.

Damaged annotated copy of Elements of Algebra by John Hind, used by Larratt W. Smith (BCL 1847) while a freshman at King’s College in 1843, its first year of operation. 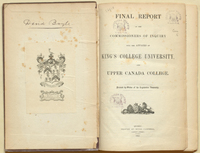 Final Report of the Commissioners of Inquiry Into The Affairs of King's College University and Upper Canada College (1852), with bookplate of the Baldwins of Spadina.

Robert Baldwin commissioned the report and this volume was probably his copy. 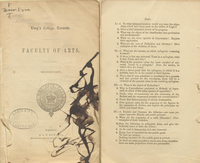 King’s College. Faculty of Arts, Examination questions for the degree of Bachelor of Arts, 1845-1846. 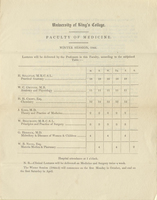 King’s College. Faculty of Medicine, Syllabus for the winter session, 1844.

Broadsheet announcing the laying of the cornerstone of King’s College ceremonies, 23 April 1842.

Card giving the order of the procession or the official opening of King’s College, 8 June 1843.

Advertisement for tenders for builders and other contractors for Upper Canada College, dated 3 April 1840.  Draft copy (reworked King’s College advertisement of previous year that shows scorch marks, possibly from the University College fire of 1890), with broadsheet. UCC was placed under King’s administration in 1836.

Ticket for the ceremonies for the laying of the cornerstone of King’s College, 23 April 1842.