The Professoriate At Play

With the removal of the faculties of law and medicine, the faculty at University College consisted of a number of chairs of broad disciplines in the Arts - classical literature, logic and rhetoric; metaphysics and ethics; chemistry and experimental philosophy; the theory and practice of agriculture; natural philosophy; history and English literature; natural history; mineralogy and geology; modern languages; and meteorology - along with a lecturer in oriental literature. The nature of the teaching programme changed over time - modern languages was reduced to the status of lectureship in 1866 - and other lecturers and tutors were slowly added as funds became available and the student body expanded (the 113 students in 1853 had tripled in number by 1880). After 1887, with the reintroduction of medicine and law to the curriculum, and the introduction of new subjects such as political economy, the number of faculty members increased rapidly.

Picnic at Go Home Bay. Photo called  “After lunch on Go Home Lake, Aug. 7, 1899”, James Brebner is seated on the extreme left, with Bain in the centre and Galbraith behind him.  The man next to him is James Ballantyne, a professor at Knox College. On the right is Charles H. C. Wright, lecturer in Architecture.

The academic programmes have been discussed at varying lengths in university and departmental histories. What is less well known is what the teaching staff did in its spare time, other than the rounds of religious and social events that were an integral part of Victorian society. The professors conducted lectures from 9:00 am until 2:00 pm, freeing their afternoons for writing and for a favourite pastime, walking. Tutors (primarily those in Modern Languages and Classics) taught from 3:00 until 5:00 in the afternoon, during which hours laboratory instruction was also traditionally given. Surviving paintings, sketches and photographs of the period show professors in academic robes striding across the university grounds or along Taddle Creek, often accompanied by students.

Madawaska Club Buildings at Go Home Bay. The Club House lasted only a few years before it was torn down. The men in front of  J. Wilton Morse’s “shack” on 6 August 1899 are (from left) James Brebner, University registrar; James Bain, City librarian; and Dr. James H. Richardson, the only member of the last graduating class in medicine at King’s College, 1849.

Walking was an acceptable pastime because it did not involve manual labour and was, in the days before a reliable public transport system, a necessity. Fishing was also taken up by many of the faculty. Avid fly fishermen included W. H. Ellis, professor of applied chemistry in the School of Practical Science, and members of the Miller family, one of whom, William Lash Miller, later became head of the Department of Chemistry. Aficionados later had more opportunity to practice their craft when the faculty playground, the Madawaska Club, was established on Go Home Bay in the Muskoka district in 1898. Members of the faculty seldom had the means to travel widely; a trip or two to Europe during their careers was all most could look forward to. (Accounts of some of these trips, like those made by W. H. van der Smissen, lecturer in German, have survived). Go Home provided a cheap and, after the introduction of a reliable steamer service at the end of the nineteenth century, a relatively accessible place to spend the summers away from the heat of Toronto. In earlier years, professors had gone elsewhere. Daniel Wilson, who became president of University College in 1880, usually spent several weeks each summer in the cool air of the White Mountains in New Hampshire or along the coast of Maine where he was able to indulge in one of his favourite leisure activities, painting.

William Henry Vander Smissen (1844-1929) Professor of German (1866-1913) and University Librarian (1873-1891).  He also fought at the Battle of Ridgeway, where he was wounded. This photograph, titled “Going down the salt mines”,  was taken in Berchtesgaden, Germany in June, 1889. The women include Amy Mason, his sister-in-law (2nd from left), and his wife, Elizabeth Sarah Mason (immediately behind him). The young women are Mrs. Tyrrell’s daughters.

In the 1890s an attempt was made to take advantage on campus of the growing popularity of the game of golf. While there were now two clubs in the city to promote rivalry amongst the faculty some, who lived on Avenue Road, wanted an opportunity to play closer to their residences. There was still plenty of space north of Hoskin Avenue, where a proposed residential development on Devonshire Place had failed, and east of the Taddle Creek ravine. Over this, beginning in 1898, a ten-hole course was laid out, while land east of Queen's Park Drive owned by Victoria College provided an additional three holes. Avid players included professors Ellis, Maurice Hutton (classics), J. J. Mackenzie (pathology), and the two Georges - Wrong (history) and Needler (German). The game was not restricted to faculty; students (including women) also joined - one even laid out the main course. They extended the legendary rivalry amongst the arts, medical and engineering students to this game. Such was its popularity that in 1899 the annual match between the faculty and the students attracted 25 participants to the side. In 1900 a trophy, the Challenge Shield, was instituted and competed for until 1906, by which time the course had become too rough for playing and the construction of private and university residences on part of the land had severely curtailed space.

William Lash Miller (1866-1940) Lash Miller was appointed lecturer in Chemistry in 1894.  His lectures, “not always digestible for the weak, were always made palatable by flashes of delightful humour”. He also made his students learn French and German.

Members of the faculty were also expected to assist students with their extra-curricular activities in student clubs and societies. Few equalled Daniel Wilson in their dedication. He initiated the founding the University College Literary and Scientific Society in 1854 and acted as its mentor until his death in 1892. Most of the professors were associated with a particular group for only a few years. Henry Croft served as the first president of the University College (later University of Toronto) Rifle Association from 1861 until 1867; forty years later Lash Miller served as its honorary vice-president for several years. Surviving memorabilia document how well he performed in rifle practice.

Daniel Wilson’s watercolour "Road to the Pool, Pemigewasset River, N.H., Aug 16 1881. Daniel Wilson, who worked for a time under the great English artist, J. M. W. Turner, enjoyed painting in his leisure time and to illustrate his own research. The painting documents his annual escape from the heat and humidity of Toronto’s summers, especially after he became president of University College in 1880. 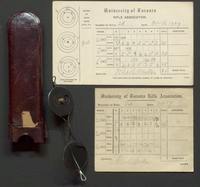 Lash Miller served as honorary vice-president of the UTRA from 1907 to 1910. These scores for marksmanship were recorded during that time. Note the spectacles that accompany them. 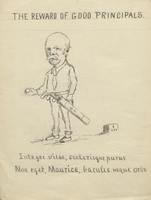 Professor of Classics, University College (appointed in 1880) and Principal from 1901.  He was a keen golfer and even wrote poetry about the game as it was played at the University. The caption on the drawing, thought to have been  done by W. H. Ellis, translates freely as:"Whole of life and free from vice, Maurice needs not sticks and ball". 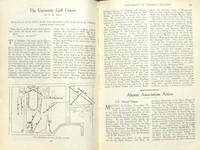 In the 1890s the University had its very own golf course or, to be precise, two of them. A three-hole course was laid out on vacant land North of Czar Street (now Charles St. West), and David Ritchie, a student (1896-1899) at Knox College, laid out a 10-hole course across Devonshire Place and the Taddle Creek ravine. The course was very popular with faculty and students (including women). 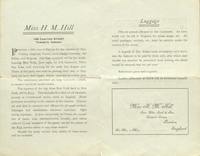 In 1892, Lash Miller, then a demonstrator in the Department of Chemistry, took his second doctorate at Leipzig (he had already received one from Munich in 1890). This card is a proposal by Miss H. M. Hill, a Toronto agent for Thomas Cook & Son, for the fifth summer tour of Europe that she had organized. 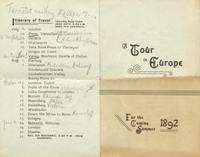 The cost of the tour was $525. Miller, who was on a very tight budget, appears to have been interested in the tour but it is unlikely he took it as the price was half a junior lecture. 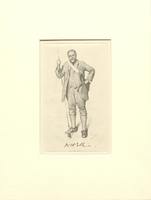 Professor of Applied Chemistry in the School of Practical Science and  later second dean of the Faculty of Applied Science and Engineering. While a student at University College, he was taken prisoner at the Battle of Ridgeway in 1866. He was an avid fisherman and golfer, and is thought to have drawn the caricature of his good friend, Maurice Hutton.