Theatre productions on campus date to the last quarter of the nineteenth century.The first major production occurred in 1882 when the newly appointed professor of classics, Maurice Hutton, organized the very ambitious undertaking of producing the Antigone of Sophocles in the original Greek. The inexperience of the students and the language difficulties were largely overcome with the assistance of members of the faculty and the production met with considerable acclaim: 'Oxford did it with less success and Edinburgh with less still'. This success encouraged a repeat performance in 1893 that once again involved the University College Glee Club and the newly formed Classical Association of University College. By the end of the century, however, Greek plays were falling out of fashion. The last to be performed for many years was a lively outdoor production in 1902 by the students at Trinity College of The Frogs of Aristophanes.

‘Antigone’, Convocation Hall, 1882 The watchman  informs Creon that, contrary to his wishes, Antigone has buried Polynices.  He is wearing  the only suit of classical Greek armour on the  continent.

'Antigone', a scene showing Antigone going to her death. Women were not admitted to University College until 1884 so the female parts, in true Greek fashion,were played by men.  Maurice Hutton, aged 26, took the role of ‘Antigone’. He spent hundreds of dollars of his own money on the production.

Except for the 1893 production of Antigone, there was little formal dramatic activity on campus before 1900, though interest in such a club was frequently voiced. St. Michael's formed one as early as 1897 but, for the most part, the students' interest in drama appears to have been sated off campus in the annual 'Theatre Night' in the 1880s. Traditionally held in conjunction with Halloween and formalized in 1899 as the Hallowe'en Club, it was the first attempt at a university-wide dramatic society (though restricted to men). The excessive enthusiasm of the participants in 1905 caused it to be shut down by the University authorities and, though it was revived in a different format two years later, it no longer met the needs of the male students seriously interested in drama.

The early years of the twentieth century were noted for the prominence of women in dramatic groups on campus. While one motivation was to raise funds for a women's residence at University College (this lasted until 1905) the principal aim was to teach "voice culture, with the physical poise which attends it... [and] dramatic expression". That was the reason given for the formation of the Women's Dramatic Club' of University College in 1905. Its leadership soon drew students from the other Protestant colleges on campus and encouraged the formation of clubs in women's residences and elsewhere. These were often innovative; the club in Queen's Hall preferred modern playwrights to the current fashion for Shakespeare and mounted in 1912 the first production on campus of a play written by a woman, Hannah Cowley's The Belles Strategem.

The cast of ‘As you like it’, 1908. The University College Women’s Dramatic Club staged this play at the Margaret Eaton School of Expression on 11 and 14 April 1908.

The need for a serious dramatic society for men was recognized by the formation in 1913 of the Players' Club of the University of Toronto. Its first production, a play by Henrik Ibsen, underlined the growing popularity of modern works. Though its activities were curtailed by the First World War, the cause of modernism was taken up during the War by the Victoria College Women's Dramatic Club, formed in 1917. This club's interest in the burgeoning "Little Theatre" movement marked a radical departure from the past, with one long play being replaced by several short ones on a variety of subjects. The return of veterans at the end of the War brought new experiences and ideas to the theatre scene. The leaders were students at Trinity College and the theme was the recent conflagration. Two productions by Harold Scudamore and others with first hand experience of the war were hugely popular; they had a decidedly Canadian sentiment and spoofed life in the trenches and the foibles of war generally. The second of these, P.B.I. or Mademoiselle of Billy Grenay, played twice at Hart House and in the Princess Theatre downtown and then went on tour in southern Ontario.

P.B.I’ [Poor Bloody Infantry], 1920 - poster. Veterans returning from World War I brought new ideas and a strong nationalist identity to theatre.  ‘P.B.I.’ was written and produced by Harold Scudamore of Trinity College and the U of T Veterans Association.  All four principals involved in it had served at the Front. This poster is for the New Princess Theatre production, following two sold out performances in Hart House Theatre. The play then toured southern Ontario.

The opening of Hart House Theatre in 1919 had an immediate impact on dramatic productions on campus. Designed as a 'Little Theatre' and described as "quite the best thing of the kind anywhere", it provided students with first rate facilities for their plays and highly professional directors, costume and set designers (including Lawren Harris, I.E.H. Macdonald, Arthur Lismer and Frederick Coates, art director in 1922-1923 and from 1930-1935) who give them encouragement and inspiration. The popularity of the Theatre and the demand for space, however, soon created problems for aspiring student actors. Within a few years booking space became a real challenge, as did getting any but minor roles in the director's productions.

By the mid-1920s, almost every interest group on campus was putting on at least one play a year. This explosion of interest in theatre and the pressure for space forced the older clubs to redefine themselves. Single-sex groups outside the Catholic colleges disappeared, beginning in 1921 with the clubs at Victoria and University College. The latter folded, to be replaced by the University College Players' Guild which became the leading dramatic gronp on campus. Its productions were "for members only, enabling it do to work other societies could not attempt." It also had its own space, the auditorium of the new Women's Union, which became the alternate campus theatre and was used by other theatre groups, particularly the language clubs.

The Guild was the "first undergraduate organization to have for its object, not primarily the producing of plays, but rather a development of student interest in theatre and everything connected with it." Plays were read and critiqued, while established actors invited to give lectures and to demonstrate the finer points of the craft. Weekly one-act plays became the norm, written by students such as Louis Alexander MacKay who also wrote short pieces for the Modern Langnage Club and penned more ambitious three-act plays. One of the latter was chosen by the director of Hart House Theatre for the 1924-1925 season. The Victoria club, with its very large membership, generally followed the Guild model. Trinity, in the late 1930s, added a new dimension by experimenting with two versions of the same play, using different casts and also with one-act plays in the late afternoon that were free and open to the public.

Another feature of the 1920s was the refinement of the 'stunt nights' of the pre-war dental and medical societies.The engineers, beginning in 1921, organized skits as part of their annual variety night, 'School [later 'Skule'] Nite'. In 1924 the 'U.C. Follies' was organized along the same lines, with one-act plays and skits, dancing, singing and other activities. These send ups of faculty and campus life were received with much acclaim. In the post-1945 years, they served as a training ground for such luminaries of stage and film as Norman Jewison, Wayne and Shuster, and Lorne Michaels.

The burst of creative activity and experimentation that marked the 1920s carried over into the 1930s in spite of the Depression, though the latter had a dampening effect. At Hart House Theatre, the return of Fred Coates as art director in 1930 coincided with the arrival of a new director, Edgar Stone. Coates' mastery of design and lighting enhanced Stone's epic productions such as Peer Gynt and Faust. These and other productions, including children's shows such as the Wizard of Oz, provided a renewed outlet for student participation, as did those of Stone's successor, Nancy Pyper.

A significant innovation was the Dominion Drama Festival and its regional counterpart, the Central Ontario Drama League. The first annual festival of the latter was held in Hart House Theatre in 1933. Winning plays were sent to the national competition, one of the photographers for which was the young Yousuf Karsh. Another innovation was the formation of the University of Toronto Drama Committee late in 1935. It produced the first university-wide play in the spring of 1936 and in December, with the encouragement of Nancy Pyper, organized the campus' first drama festival. Although the Theatre was left without a director after Pyper's departure in 1937, the space was heavily used by the Drama Committee. The lectures on drama, the writing contests, and the plays drew a large number of students, some of whom went on to a life-time of acting in amateur theatre. Amongst these was Francess Halpenny who was still appearing in plays forty years later.

Scene from Hart House production of "Michael", Photographed by a young Yousuf Karsh

Dominion Drama Festival, 1934. In the 1930s an important development in theatre  was the Dominion Drama Festival and its regional  counterpart, the Central Ontario Drama League. In 1934 Group Three of the Hart House Players, directed by Edgar Stone and presenting ‘Michael’,were adjudicated winners.  The poster was designed A. Scott Carter.

With the advent of war, Hart House 'went dark' and was revived in 1946 under the direction of Robert Gill, "who can be said to have fostered what would amount to the virtual breeding ground of Canada's modern professional theatre." He is known for his undergraduate productions where he used students almost exclusively. Richard Partington has compiled a list of over twenty actors and directors who represented not only "the vital core of the new Canadian theatre" that emerged in the 1950s but also made their names in film and as drama critics outside the country. One of these, Donald Sutherland, continues to inspire students when he drops into theatre venues on campus.

Theatre on campus has undergone a lot of changes since Gill stepped down as director of Hart House Theatre in 1966.The integration of theatre into the academic research program with the creation of the Graduate Centre for the Study of Drama was a major departure from past practice and it took some time to find its milieu. By the late 1970s the Centre had returned to the community theatre model of the 1920s with major student involvement and an emphasis on producing Canadian plays.

During the University's Sesquicentennial celebrations in 1977 a number of plays were presented. One was James Reaney's The Dismissal, based on the 1895 student strike. Professional actors were brought in for Tennessee William's The Sweet Bird of Youth and Anton Chekhov's The Cherry Orchard, the poster for which forms an interesting contrast to the stage set designed by Fred Coates for the same play fifty-one years earlier.

In 1881 Maurice Hutton, the newly appointed professor of classics, suggested that the students of University College stage ‘Antigone’ in the original Greek. The play was presented in Convocation Hall, University College, on April 11 and 12, 1882.

As a part of Trinity College’s Jubilee celebrations, its students put on the ‘Frogs’ of Aristophanes in the original Greek. The performance took place in the natural amphitheatre in front of the Provost’s Lodge on the Queen Street West site of the ollege. Here the audience watches the chorus in action.

In the 1920s many students were writing and producing their own plays. This image is of a drawing by J.E.H. MacDonald of Harcourt Brown, a member of the Players’ Guild and a friend of Louis Alexander MacKay. 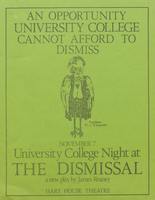 Poster from this play based on the 1895 student strike. ‘The Dismissal’ was written by James Reaney as a part of the sesquicentennial celebrations of the University of Toronto in 1977. It was produced by the NDWT Company and performed in Hart House Theatre.