The end of the four-day student strike was signalled at a mass meeting on February 20, when the students voted to return to lectures pending negotiations to appoint a commission of enquiry.

Of the ringleaders of the strike, he was the only student to suffer academically – he was not permitted to complete his year and was not readmitted. His conduct before, during, and after the strike was marked by principle and concern for his fellow students.

In this first issue of the new academic year, the editor is sharply critical of the manner in which some members of the Commission of Inquiry conducted themselves.

The song displayed here is ‘The undergraduate’s lament’. 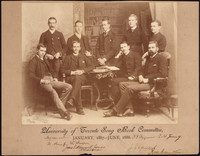 In January, this 1887 a committee was charged with producing the University’s first formal song book.

The members of this club were: (standing, from left): brothers Charles William and Daniel Gilbert  Gordon; (seated, from left) Robert McGinnis Hamilton, Richard Campbell Tibb, and Robert Haddow. Charles Gordon is better known as the hugely  popular writer, Ralph Connor. One of his novels, The Sky Pilot (1899), sold over 1,000,000 copies.

By the mid-1880s, with the impending expansion of the University beyond University College and the rise of new academic disciplines in other universities, a clamour for changes to the curriculum also arose. In the 1890s, President Loudon's stormy relationship with the students (he personally turned a fire hose on them shortly after becoming president), attempts by the administration to control what the students thought and wrote, alleged nepotism over appointments to the faculty, and complaints about the quality of teaching led to the student strike of 1895. It culminated in a four-day boycott of classes following the dismissal of a popular professor of Latin, William Dale, who had dared to voice criticism of academic appointments in print. When the Latin tutor, F. B. Hellems, resigned in support of Dale, the Classical Association launched a petition to have him reinstated. The strike had a long-lasting impact on relations between the faculty and the students, partly because future students were not allowed to forget that the University had refused to lift the suspension of James Tucker, the idealistic editor of the Varsity and one of the leaders of the strike. The strike also led to enmity between some members of the political economy class and William Lyon Mackenzie King, the future prime minister. At a public meeting he had moved the resolution calling for a strike, but then continued, with some other students, to attend classes. For this he was not forgiven, as a letter from a former class-mate, written much later, demonstrates.