Varsity Students in the Victorian Era

The Lit was led initially by the forty or so students in residence who, through living somewhat isolated lives away from town, created their own fun and sense of beIonging. For example, they created a secret society to which all students were required to belong (in the 1860s it was called the Neo-Platonic) and before hazing was introduced in the 1880s, "each student had to pass an examination, in which Wit and Worth were the keys to success."

Students on the front campus, ca. 1880. Photograph of a group of people, including students, some of whom appear to be members of ‘K’ Company. The boy may be the son of the beadle.

At the annual Lit elections, the residence students formed the core of the Inside Party which defended its ascendancy successfully for many years against the Outside Party that was centred round the day students. Voting day was dominated by a spirited show of physical strength in the guise of the Brute Force Committee, as a later reminiscence records.

'The huskiest members of opposing parties donned football or other neglige and scrapped for the possession of the door of the poll, which was always strongly reinforced by timbers and open just sufficiently to allow a Toronto-boarding-house-fed voter to squeeze through. The party which got possession of the door... kept opposing voters out and pulled their own in.'

This contest lasted until about midnight, then the poll was opened and voting went on until about 3:00 am.

The ‘Lit’ elections, 1896. Where?  St. Andrew’s Hall, 12:10 am. This may be the only surviving photograph of the famous ‘Lit’ election contests of the late 19th century. The ‘Brute Force Committee’, to which was entrusted the admission of supporters only, has done its work and voting is about to begin.  The students are dressed casually, as they were likely to lose (as can be seen here) pieces of their clothing. Donated by James W. Bain, then an engineering student.

Over time, other student groups emerged to accommodate the diverse academic and extra-curricular interests of the students. Football, the first athletic game played on campus, was well established by the mid-1860s though a formal structure was a decade in the future. In 1866, facilitated by the erection on the back campus of a gymnasium consisting of a wooden shed with a sty on one end in which the Residence gardener kept his pig, the Dean of Residence established the annual athletic games. One of the earliest formal clubs was the University College Natural Science Club, formed about 1867; it was followed by the University College Young Men's Christian Association in 1871. By the end of the century, the number of student clubs had grown to encompass most of the academic disciplines - including classics, mathematics and physics, history and political science, and modern languages - and a host of extra-curricular activities, such as music, drama, debating and (a sign of the times) temperance. There was even a committee that in 1887 produced the first university songbook. Women students, after they were admitted during the 1884-1885 academic year, formed their own organizations, the first being the Women's Literary Society of University College in 1891. They also joined the men in the class societies for their respective years and in some of the subject-oriented clubs such as the Classical Association and the Modern Language Club that were never segregated.

University College Women’s Literary Society, 1895.When women were admitted to University College during the 1884-1885 academic year, they were not allowed to join the ‘Lit’, so they formed their own organization in 1891. This photo belonged to Elizabeth Rebecca Laird (BA 1896), curator (back row, 2nd from right), who, like her fellow officers, got caught up in the 1895 student strike.

From the earliest days, there was periodic interest in student publications but often with indifferent results.The first attempt at a student newspaper was the short-lived Maple Leaf at King's College in 1846. A proposal in 1855, during University College's darkest days, for a monthly newspaper failed to raise sufficient interest. It would be another fourteen years before the Lit seized the initiative and produced the College's first yearbook, The Annual (no volume was forthcoming the following year).The students at Victoria College, then in Cobourg, began producing their annual literary publication, Acta Victoriana, in 1878. The next year the Lit published University College's first newspaper, the White and Blue. It was succeeded in 1880 by the Varsity, published initially by a joint stock company. Perhaps anticipating University federation, the first attempt at a university-wide yearbook, which included the affiliated colleges, appeared in 1887. As with the Annual, only one volume was published. A yearbook that lasted did not appear until 1898; Torontonensis would publish until 1966. It introduced a new feature - photographs. The first journal written by women, Sesame, was published in April 1897.

The usual student concerns aside, the student body faced the impact of international political events. The "Trent" affair early in 1861 raised tensions between Britain and the United States and resulted in the formation of the University Rifle Company with Professor Croft as captain; it was attached as NO.9 to the Queen's Own Regiment.The outbreak of civil war in the United States divided the students into partisans of both sides. While most students favoured the North, among them were a number of men from the South who had come to the University because of the war. When these students objected to the proposal that a black student be admitted to the Lit, the College administration, led by President McCaul and with the support of Wilson and other professors, intervened. Wilson had been appalled by the racism he witnessed in the United States and was well aware that it also existed in Canada. The faculty would not tolerate such discrimination at the University of Toronto and the candidate was elected.The later years of the civil war raised the spectre of invasion with the anticipation of raids by the Fenians. Students were first called out in 1864 and at the battle of Ridgeway in June 1866, three were killed, four wounded, and two captured. Students did not fight again until 1885 when twenty-seven joined up to help quell the North-West Rebellion.

‘K’ Company, 1861-1893. This University volunteer company was formed in 1861 during the ‘Trent affair’. On 1 February 1893, the Varsity reported: “It has... been decided by the authorities to sever the connection of the company with the university, and, as there was nearly $200 in the treasury, it was resolved to hold a farewell banquet.” This is the menu for that memorable bash.

The ‘Canadian volunteer’, 1866. The Fenian raids made a deep impression on the University for, of the students who volunteered to fight, three were killed, four wounded, and two captured. This delightful sketch by Arundel Charles Hill (BA 1867) shows clearly the bottle-green jacket and the pill-box hat. Not visible is the broad red stripe on the trousers. The copy of the University College calendar in which it appears was owned by John Langton.

Within the University, the students had the advantage of small classes and getting to know their professors and tutors well but, because there were so few instructors, a single incompetent one could have a much greater impact on the academic programme than now. The good professors were much appreciated."Croft goes over an immense amount of ground in an hour", one student wrote in his diary in 1866. "It is difficult to snatch a note without missing some valuable fact ...he is the finest man about the College. In English literature, "Wilson [is] profound on the sonnet. It is really marvellous how much information he can give upon the character, history of that species of poetry or verse." The appointment of James Paxton Young as professor of metaphysics and ethics in 1871 brought to the campus the best lecturer the University had yet seen. The students habitually stood and cheered when he entered the room and he was a frequent recipient of the mark of appreciation when he made a good point during his lectures - the stamping of feet.

The students, however, did not suffer incompetence or laziness gladly and took their revenge as they could. As already noted, their dissatisfaction was a factor in the retirement of James Beaven as professor in 1871. On 6 November 1866, "one of the seats in Beaven's lecture room found itself on end to welcome the Professor. He took no notice of it. Some body outside battered the door. He did not seem to notice it." Stuart Foster, the classics tutor that year who was habitually late, was "fastened out of his room [again] to-day and his footstool found a resting place upon the top of his table. Sturgeon had to be summoned with a screwdriver to take three screws out of the door... " Dissatisfaction with some of the professors was a continuing phenomenon; one the worst offenders over the years was W. H. Vander Smissen who was noted for his frequent absences and for repeating his lectures. The students stayed away in droves. Bessie Scott recorded in her diary in January 1891, "Vander's lecture awful - first I have attended since October". 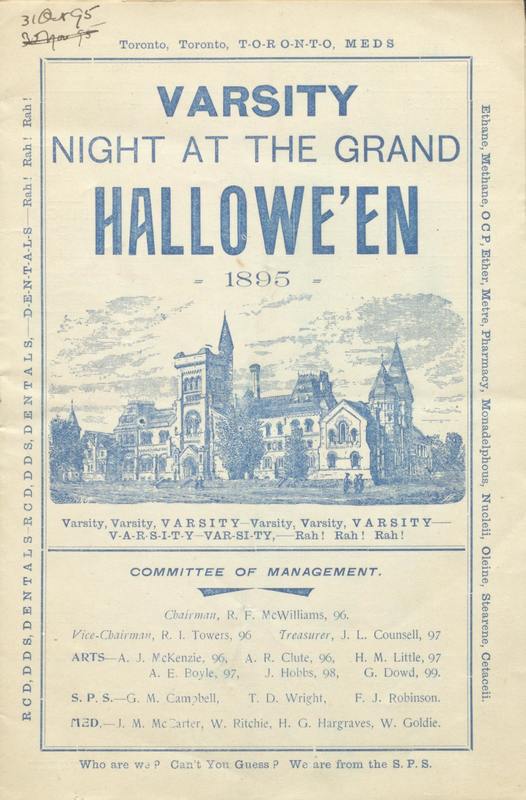 Programme for "Varsity Night at the Grand Hallowe’en, 1895."

By 1882 Hallowe’en included a “theatre night” at downtown theatres, where male students put on skits interspersed with songs and dance numbers. There were also outrageous pranks and rowdiness. The Hallowe’en Club, formed in 1899, was a university-wide affair, including students from Arts, Medicine and the School of Practical Science.

The song displayed here is ‘The undergraduate’s lament’.

This student group was was an early attempt at fostering a university-wide identity while maintaining the competitive college and faculty spirit. The resolution for the debate on December 2 is still topical today:  “That war is a necessary means to the advancement of civilization”.

The White and Blue, launched in October, 1879, was the first attempt by the ‘Lit’ at publishing a newspaper. The following year it was replaced by the Varsity which was published initially by a joint-stock company.