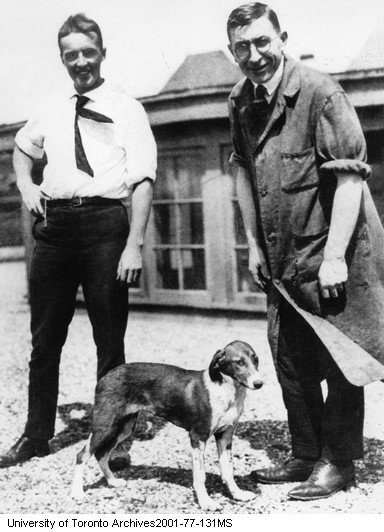 This iconic photograph of Banting and Best with one of the laboratory dogs gives the impression that they were a happy team.  This apparently was not the case.  There was much friction between Banting and Best.  Best was outraged that he was not the one to share the Prize with Banting.  In the end Banting shared his Nobel Prize money with Best and Macleod shared his with Collip.  Insulin was patented by the group but they gave their rights to the University of Toronto.  Eli Lilly began large-scale production of insulin and by 1923 were able to supply all of North America.

The dogs' surgically removed pancreases were used to distill insulin in the equipment pictured.  The insulin was then used on the now diabetic dogs to see if it would help.  By January 1922 the now purified insulin was ready to be tested on a human.  The treatment was so significant, the following year the Nobel Committee awarded the prize in Physiology or Medicine to Banting and Macleod for the discovery of insulin.

In 1921 Banting, a surgeon, approached Professor John Macleod, a leader in the study of diabetes, with a theory regarding pancreatic digestive juices and their role in diabetes.  Though sceptical, Macleod gave him a laboratory, minimal equipment, 10 dogs and a medical student, Charles Best.  A biochemist, James Collip was added to the team in the later part of the year when refinement of the distillate was required.  What followed was the discovery of Insulin for the treatment of diabetes, the single most noted discovery to occur at the University of Toronto.