This is the only known photograph of the riots at Christie Pits in Toronto, 1933. Here is a description of the event provided by The Canadian Museum for Human Rights, online: https://humanrights.ca/riot-christie-pits

On the night of August 16, 1933, after a softball game at Toronto’s Christie Pits Park, a gang of young men unfurled a white banner. On it was a black swastika, symbolic of Nazi Germany’s persecution of Jews. It was directed at a team of mostly Jewish teens from Toronto’s Harbord Playground. Anti-Semitism had been mounting in Toronto, then an overwhelmingly British, Protestant city. Groups called “swastika clubs” had formed to intimidate Jews. The banner sparked a riot. Youth from Italian and Ukrainian backgrounds rallied to the Jewish side. The six-hour brawl marked a turning point for resistance to anti-Semitism. It led to a Toronto ban on the swastika."


The riot revealed the xenophobic attitudes toward Jews and other non-Anglo immigrants among Anglo Canadians. Jews represented the largest minority in Toronto in 1933 and were thus a target of xenophobic residents. In August 2008, a Heritage Toronto plaque was presented to commemorate the 75th anniversary of the riot. 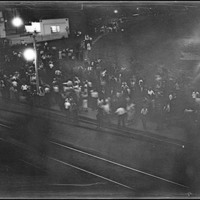