"People boxed in by riot police at Queen and Spadina"

"People boxed in by riot police at Queen and Spadina"

This photograph captures police using "kettling", a controversial crowd control technique that involves boxing people into an intersection and slowing moving inward so that people are crowded tightly together.

The last day of the G20, protesters ended up at Queen and Spadina. Soon after stopping the crowd police boxed them in and began grabbing them out 1 by 1 to arrest people. They were standing there peacefully, many people weren't even protesting they were just in the wrong place at the wrong time. I'm not sure what the police's plan was. Shortly after this pic was taken it started to pour rain. Many of these people were forced to wait for hours in the rain in restraints.

Self published via Flikr 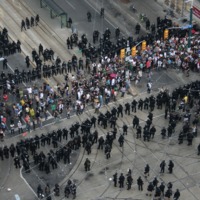