In All Of Us Command: Story of an Anthem 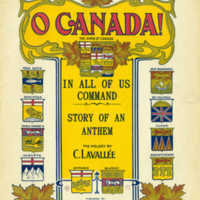 Intended to instill a sense of communal national pride, “O Canada” occupies a significant place in the Canadian public’s imagination. Played in schools and sung at sporting events nationwide, many Canadians know the melody and lyrics by heart. However, few are aware of the national anthem’s colourful history.

In the following exhibit, you will discover the compositional context of “O Canada” and examine different versions of the piece from our library’s extensive Canadian Sheet Music Collection. A historical narrative of the anthem will be traced, delving into the nineteenth century French Canadian origins of the piece and the struggle for English lyrical uniformity. The exhibit concludes by scrutinizing the issues facing us as twenty-first century Canadians, as we strive to establish a version of our national anthem that better reflects the rich diversity of our country, its people, and environment.

Please stop by the University of Toronto Faculty of Music to see the physical exhibit, which begins in the lobby and continues downstairs in the displays outside the library. 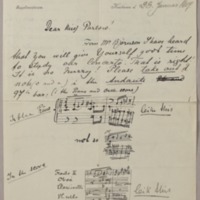 The archival collections of the University of Toronto Music Library document the rich musical life of Toronto in the twentieth and twenty-first centuries. A particularly fine example from the archive is the Kathleen Parlow collection. Parlow (1890-1963) was a Canadian violin prodigy and the first foreign student to enroll in the St. Petersburg Conservatory where she studied with Leopold Auer along with other prodigies such as Mischa Elman and Efrem Zimbalist.

Her early professional success took her to prestigious concert venues in Europe, North America, and Asia. This exhibit offers a glimpse into Parlow's unique relationship with Norway, from being the recipient of the 1735 Viotti Guarneri del Gesù violin given to her by Einar Bjørnson, to her performances all over Norway, including those for the Norwegian royal family. Featured are reproductions of some pages of the manuscript of the Johan Halvorsen violin concerto, which was dedicated to Parlow and premiered by her on August 14, 1909 in Scheveningen, Holland. Also included are letters from Halvorsen to Parlow giving her corrections to the score as well as suggestions for performance, photographs, entries from her daybooks, and examples of programmes of her Norwegian concerts, many under the baton of Johan Halvorsen.

Korea, "Canopy," and Consultation: Canadian Attempts to Influence US Nuclear Policy in the Early 1950s 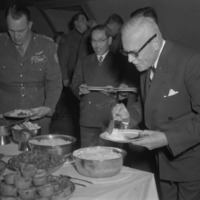 On 30 November 1950, President Harry S. Truman delivered a speech affirming that the United States was considering the use of the atomic bomb in Korea. This proposition to unilaterally deploy the “ultimate weapon” concerned US allies, especially given the joint nature of the UN forces operating in Korea.2 Particularly concerned was British Prime Minister Clement Attlee, who wanted to ensure that the British would be consulted on any decisions to deploy the atomic bomb in the Far East. Attlee met with Truman on 4 December to discuss Britain’s role in atomic cooperation, and after their meeting the president released a statement promising to keep the British prime minister informed, a promise which was also extended to the Canadian prime minister. Through public statements and negotiations, the Canadian government aimed to exert influence over American nuclear policy.

Truman’s speech encouraged Canadian officials to consider their position toward a first strike by the United States in Korea. While Canada had no legal right to be consulted on this decision, they decided to focus on their role as a “member of the inner circle on atomic matters”  to exert their influence.3 Canada made its position known to the US State Department, distinguishing the atomic bomb from other military weapons and stating that the advantages of its use would be “outweighed by the reactions in the free world and […] the grave peril in which it would place Western Europe.”4 While they respected US authority over the bomb, they used their position as an atomic ally to voice their concerns and attempt to influence US decision-making.

Truman’s speech also caused the Canadians to be more careful in their negotiations with the United States on the establishment of a US base in Goose Bay, Newfoundland. The US proposed a “canopy” agreement, first drafted as a “Pentagon Paper,” to allow them to use part of a Royal Canadian Air Force base in Goose Bay. Newfoundland held strategic importance for the defence of North America against a Soviet attack, and the United States wanted a military base to launch a counter-offensive if needed. While the Canadian government supported a US strike launched from Canadian soil in the event of a Soviet attack on North America, it was wary of other operations that might infringe upon Canadian sovereignty and go against Canadian policy. The Canadian government used its position and concerns surrounding sovereignty to exert influence over US atomic policy, attempting to reduce the likelihood of a nuclear strike. Canada’s insistence on specific terms for the canopy agreement led the United States to abandon the proposal in favour of informal diplomatic talks held at regular intervals.

Canadian officials’ actions regarding both the potential use of the bomb in Korea and the agreement at Goose Bay illustrate concerns about the possible unilateral launch of a nuclear weapon by the United States. While the Canadians accepted that the United States would not ask Canada for permission before launching a nuclear weapon, they maintained a position of advocating for maximum consultation. Canada reinforced its role as an atomic partner, and, in the case of Goose Bay, a sovereign state, to attempt to influence American nuclear policy. 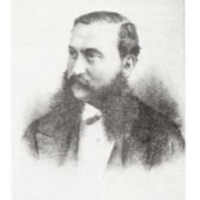 In Toronto, on January 3-5, 1867, the first meeting of dentists occurred at the Queen's Hotel with the goal to establish the Ontario Dental Association (ODA). The efforts of the first members of the ODA resulted in the passing of the ‘Act Respecting Dentistry’ in 1868. This legislation permitted dentists to regulate their profession and create a dental school to ensure proper training of dental practitioners. After a few attempts, the first dental school in Ontario was opened in 1875. It is currently known as the Faculty of Dentistry, University of Toronto. This space provides a brief biography of the nine dentists in attendance at the first meeting in 1867. In addition, you will find a summary of some popular dental topics in the late nineteenth century. 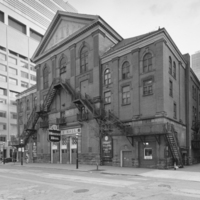 We are delighted to present this virtual exhibit highlighting the photographer Peter MacCallum's Massey Hall Project.

The project features stunning interior and exterior images of Toronto’s most cherished concert hall. The photographs in this series are primarily dated from 2008 to 2013, while a small but important group dates from 1987. The Peter MacCallum fonds is cared for by the University of Toronto Media Commons Archives, in both digital and physical formats. 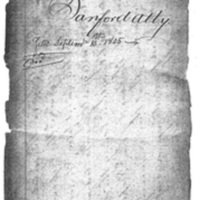 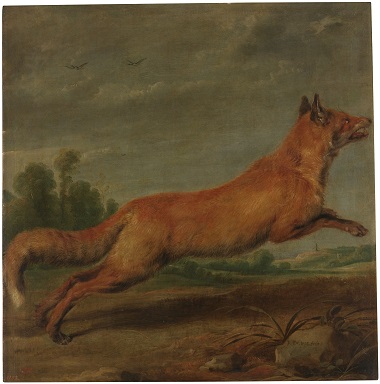 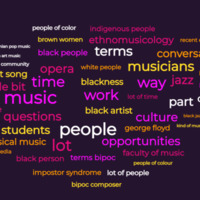 Polyphony is a musical style in which many parts combine, each part having its own individual melody while simultaneously harmonizing with each other. Each part is independent and equal, while working together to form a masterpiece.

Polyphony: Diversity in Music fosters dialogue with BIPOC musicians through interviews with Faculty of Music students and faculty, as well as musicians from across Canada. It is our privilege to highlight these individuals' voices alongside the works of diverse musicians from within the Music Library collections.

This exhibit provides a safe space for U of T students and faculty to equally engage with issues of diversity in music in a North American context. 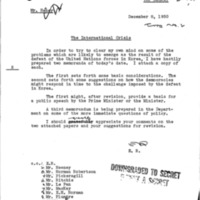 In December 1950, the prospects of a UN victory in Korea were slim. Chinese forces had entered the war in October 1950, and their successful campaigns forced the UN coalition to retreat past the 38th parallel. While UN military commanders scrambled to regain control, allied governments reassessed the political implications of a potential defeat. The Canadian government was seriously concerned. On 2 December 1950, a memo was sent out to the Secretary of State for External Affairs, the Chiefs of Staff Committee, and the Joint Planning Committee to prepare an immediate assessment of the situation and recommend possible options going forward.

One of the civil servants who responded was Escott Reid, then Deputy Under-Secretary for External Affairs. By this point, Reid was known within the government as an idealist with a commitment to collective security, having played an influential role in the signing of the UN Charter and the North Atlantic Treaty. At the same time, Reid was also known for the divisive and provocative opinions he circulated in departmental memoranda. The situation on the Korean peninsula brought out both of these sides of Reid. In December 1950, he drafted two memoranda outlining the current international situation, the major failures of the Western treatment of the Cold War thus far, and the possible consequences of another failure in Korea. Reid’s main argument was that Western response has always been too slow and “inadequate,” and that all of the Western responses to communist aggression have “proved to be either too little or to have come too late.” As a solution, Reid proposed a global strategy in order to attain a balance of power with the Communist bloc and establish peaceful coexistence.

Reid circulated this memo to officials in Ottawa as well as Canadian representatives overseas. What ensued was a fascinating back-and-forth, the subject of this briefing book, which speaks to the divergent opinions present in 1950 and 1951. Canadian-American relations, economics, and race were among the many issues at hand. Over all of these discussions hung the spectre of a Third World War, this time involving atomic weapons.  These discussions were much more than an intellectual exercise for those involved—for them, the very survival of human civilization hung in the balance. 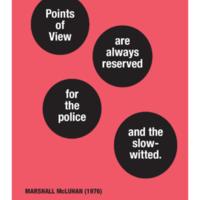 The Russian Revolution in Contemporary Opinion 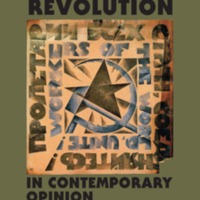