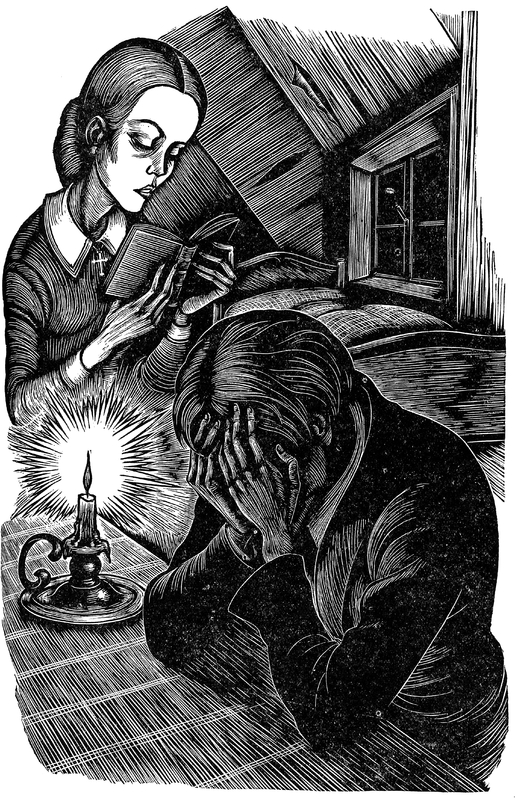 This 1938 edition of the Constance Garnett translation of Crime and Punishment features the wood-engravings of Fritz Eichenberg. The artist had previously illustrated The Idiot and The House of the Dead. Here he provides illustrations that are at once insightful, entertaining, and thought-provoking. In a key scene, Part 4, Chapter IV, we find Raskolnikov in the sparse confines of Sonia’s lodgings, listening to her read the story of Lazarus of Bethany from her copy of the New Testament. Eichenberg masterfully captures the wracking conscience of Raskolnikov, the sacrosanct simplicity of Sonia’s domestic life, and the novel’s first engagement with the notion of redemption through Christ.

Fritz Eichenberg (1901-1990) was a German-American illustrator renowned for his work dealing with themes of social justice, religion, and nonviolence. Born in Cologne in 1901, Eichenberg mastered his trade of etching, engraving, and lithography at the Municipal School of Applied Arts in Cologne and the Academy of Graphic Arts in Leipzig. In his early twenties he illustrated Gulliver’s Travels and Till Eulenspiegel. He immigrated to the United States in 1933. In New York City, the artist transformed his experience of having lived in war-scarred Cologne during World War I, and his fears of the rise of Nazism, into art. During his long career, Eichenberg illustrated works of literature from a vast range of genres, including Emily Bronte’s Wuthering Heights, Georges Bernanos’ novel Journal d’un curé de campagne, and Dylan Thomas' Rebecca’s Daughters. 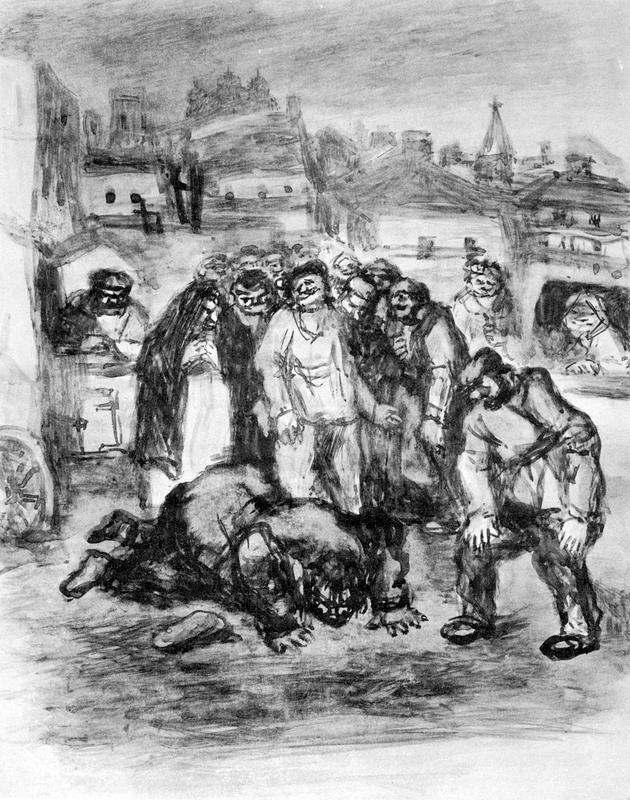 This 1956 edition of Constance Garnett’s 1914 translation features the illustrations of painter, etcher, and illustrator, Benjamin Kopman. In the scene from Part 6, Chapter VIII, he pictures Raskolnikov in the square of the Haymarket as he attempts to carry out Sonia’s advice concerning the act of confession: “Go to the crossroads, bow down to the people, kiss the earth, for you have sinned against it too, and say aloud to the whole world, I am a murderer.” The primitivist appearance of the characters and the heavy black outlines are typical of Kopman’s style, and reflect the influence of his contemporaries Henri Rousseau and George Rouault.

Benjamin Kopman (1887-1965) was born in Vitebsk, Belarus, and emigrated to the United States with his family in 1903. In 1905, Kopman enrolled at the National Academy of Art in New York City, where he studied under the tutelage of the great Impressionist painter Emil Carlsen. There, working alongside his close friends Claude Buck, Abraham Harriton and Jennings Tofel, Kopman formed the Introspective Group of subjectivist painters. In 1945, he was awarded the Gold Medal of the Philadelphia Academy, and today his artwork can be found in leading institutions of art and culture, including the Museum of Modern Art, the Metropolitan Museum, and the Whitney Museum for American Art. 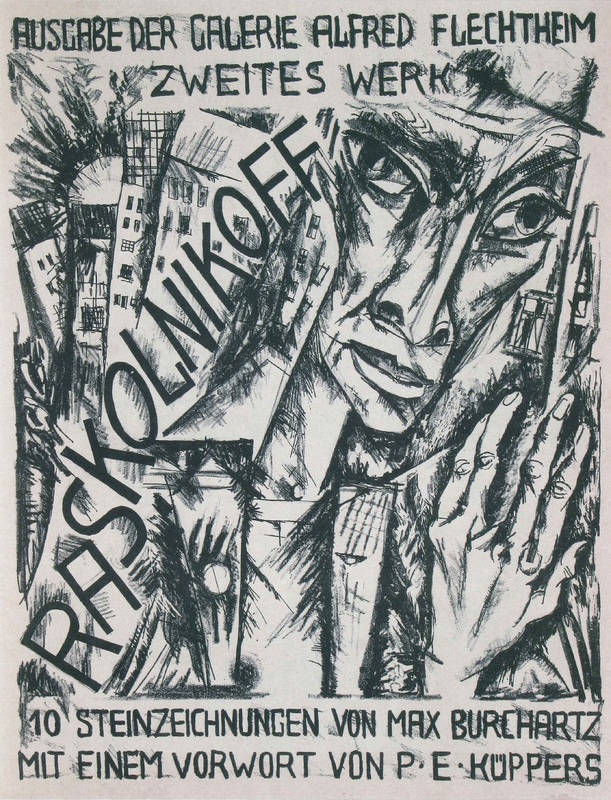 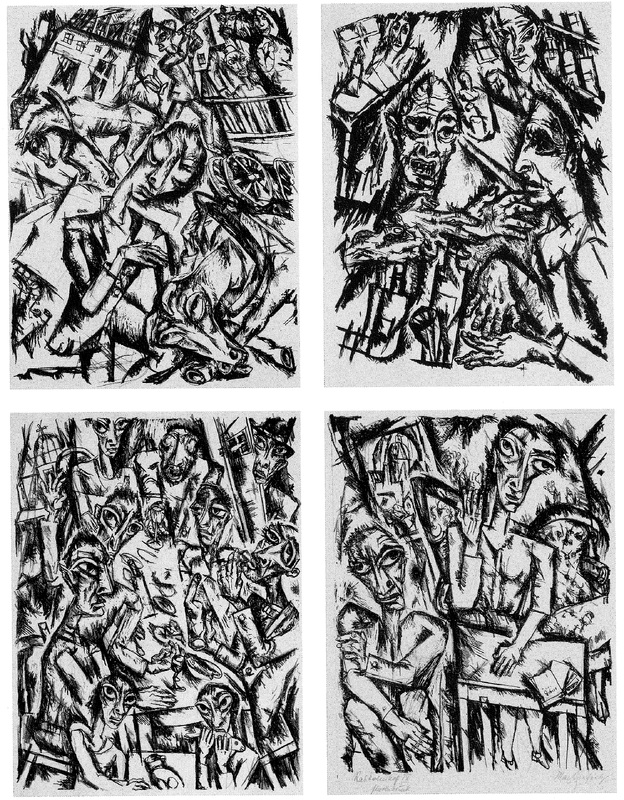 In 1919, upon returning from fighting in the First World War, German artist Max Burchartz produced a series of lithographs focused on Dostoevsky’s Raskolnikov. The collection is especially striking for the body contortions, space distortions, and linear labyrinths that make for a haunting addition to the novel’s narrative. In the prints displayed, Raskolnikov’s progress is charted through his dream of the flogged horse, his visit to the money lender, drinking in the tavern with Marmeladov, and conversing with Sonia in her quarters.

Max Burchartz (1877-1961) was a German artist, photographer, and professor. In 1907 he began his studies at the Art Academy in Dusseldorf, though he left for war before graduation. Following World War I, he began a career in advertising, working on new methods of typography, and later gained a degree at the Folkwang Schule in the Ruhr district. He later voluntarily joined the German army during World War II, and returned to the Folkwang Academy in 1949, continuing his career as a pioneer of modern design. 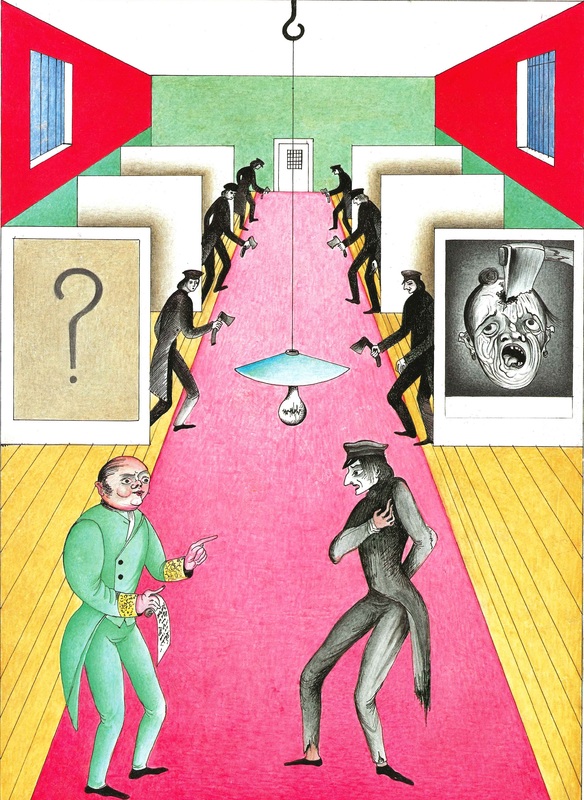 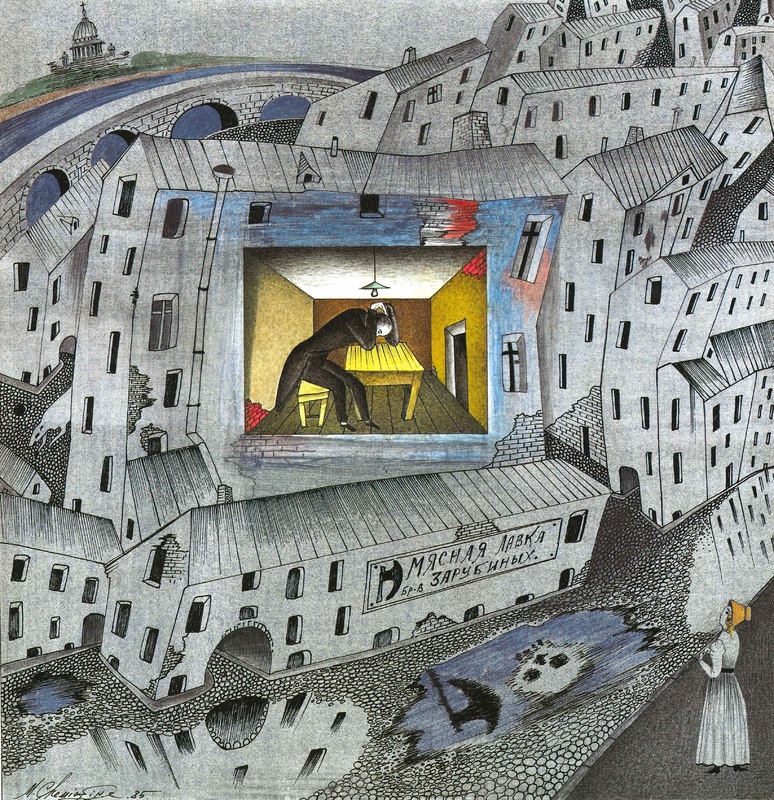 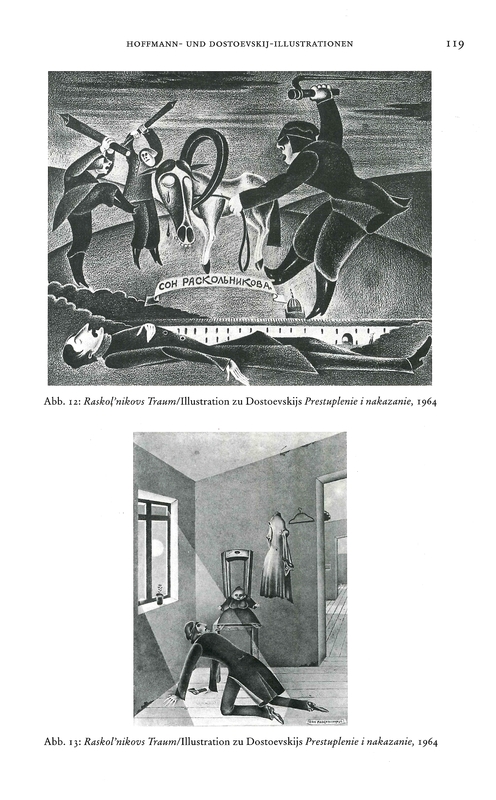 Chemiakin experimented with a range of media in his artistic transposition of Dostoevsky’s novel, the first of which incorporated etchings and graphite works made from 1964 to 1969. For example, he depicted Raskolnikov’s dream of Part 1, Chapter V, and his third dream in which he returns to the apartment where he murdered the money-lender and her daughter. Two paintings from 1985 in ink and watercolour capture the tortured isolation of Raskolnikov and the confrontation of Raskolnikov by Porfiry.

Mikhail Chemiakin (1943-) is a Russian painter, sculptor, stage designer, and publisher associated with the nonconformist art tradition of St. Petersburg. A victim of persistent political persecution, he was exiled from the Soviet Union in 1971 and resettled in France and later in New York in 1981. In the 1990s, Chemiakin began to visit his native country once again, and today his works can be found in the State Russian Museum, St. Petersburg, the State Tretyakov Gallery, Moscow, the Metropolitan Museum in New York, and the São Paulo Museum of Art, Brazil. 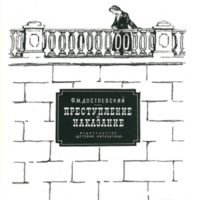 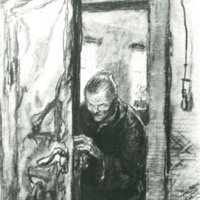 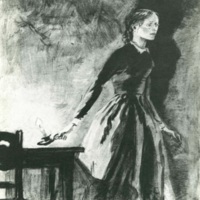 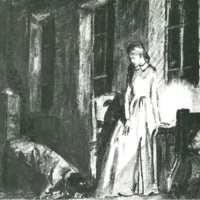 The illustrations by Dementii Shmarinov are from the 1936 edition of Crime and Punishment, from the Soviet Union’s first publisher of children’s literature, Izdatel’stvo “Detskaia Literatura.” One of this book's pages shows Raskolnikov’s ascent to the money-lender’s apartment, and below it the scene of Raskolnikov’s fainting spell at the police station, and on the opposite page is an image of the money-lender’s suspicious glance after she opens the door to her uninvited guest.

Born in Kazan, Russia, Dementii Shmarinov was a Soviet graphic artist who specialized in literary illustrations. Famed for his innovative interpretations of the psychological characteristics of his heroes, he achieved great success with his illustrations for Mikhail Lermontov’s A Hero of Our Time, Leo Tolstoy’s War and Peace, and Alexander Pushkin’s The Queen of Spades. These works, alongside his designs for Soviet-era political posters, can be found in the State Tretyakov Gallery, Moscow, and the State Russian Museum, St Petersburg.

Founded in 1933, the publishing house “Detskaia Literatura” was associated with the Communist Party’s youth organization, Komsomol. In its first year, 168 titles were published with almost 8000 circulating copies, and leading literary figures such as Maxim Gorky and Samuil Marshak ensured this success increased each year. 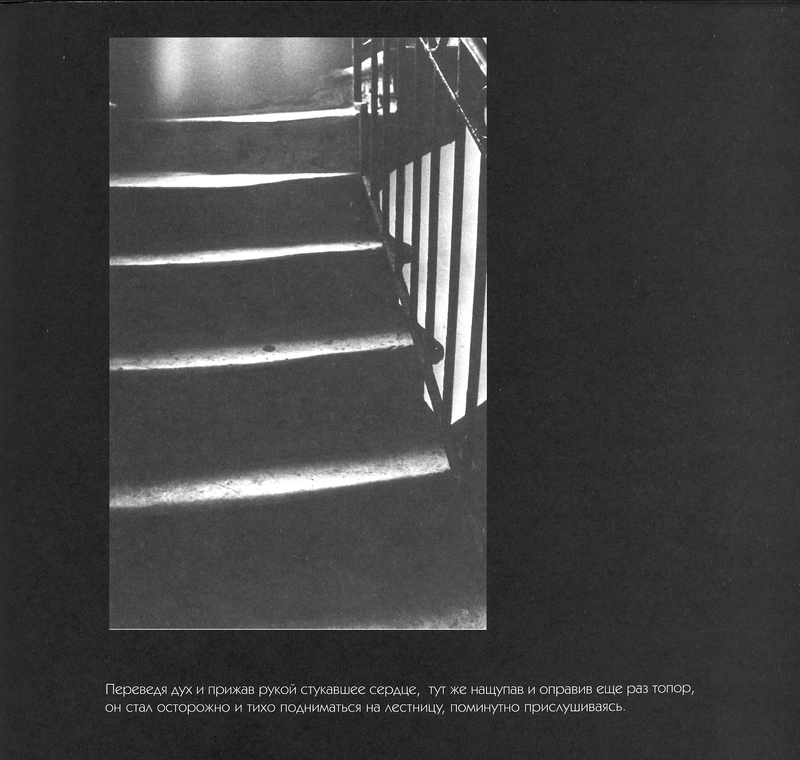 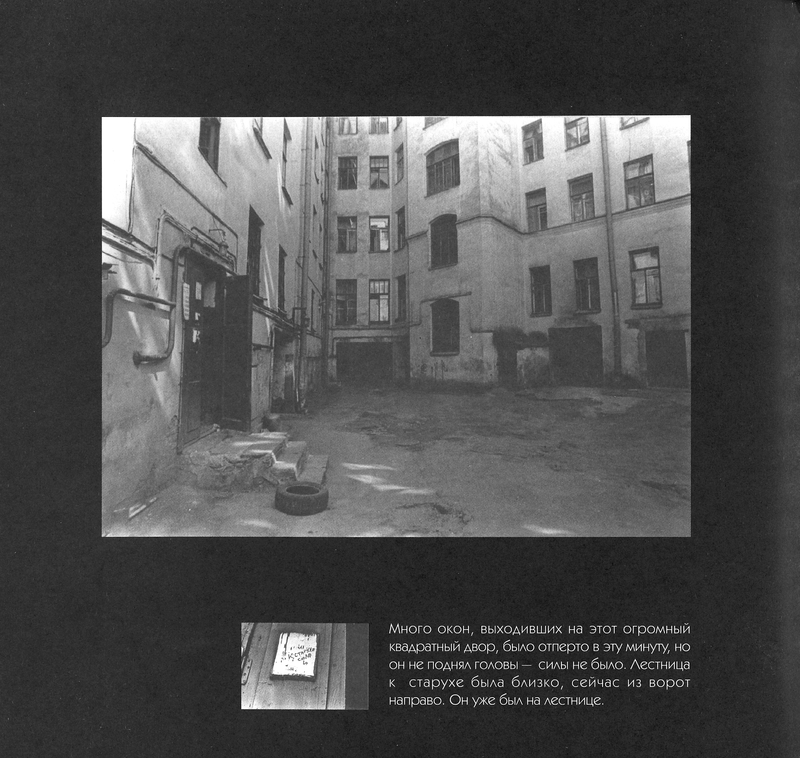 This collection of photographs, entitled Dostoevsky’s Scenery: The Story of a St. Petersburg Quarter, maps the topography of Crime and Punishment and provides a chronological account of the novel’s setting. The photographs focus on the narrow radius of 730 steps that encapsulate the novel’s first six parts, tracing Raskolnikov’s footsteps from his room on Stoliarnyi Lane, his ramblings along Ekaterininskii Canal, and the infamous scene of the crime, the pawnbroker’s apartment.

Two of the photos depict the courtyard and stairway to Alyona Ivanovna’s apartment in the moments before Raskolnikov’s fateful act in Part 1, Chapter VI: “After catching his breath and pressing his hand to this humping heart, after feeling for the axe and adjusting it one more time, he began climbing the stairs, warily and softly, constantly straining his ears.”

This collection was published in 2001 and features the photographs of Liudmila V. Volkova, a graduate of the Khavarovsk Institute of Arts and Culture, St. Petersburg State University of Culture and Arts, and current artistic director of the Vyborg Palace of Culture, St Petersburg. This edition was published by the Russian-Baltic Information Centre, which provides resources on a range of educational topics and archive-centric research endeavors. 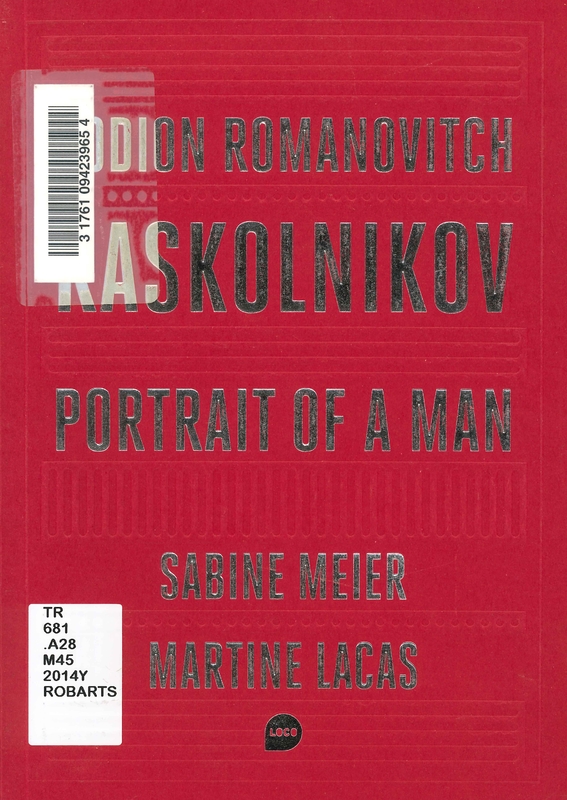 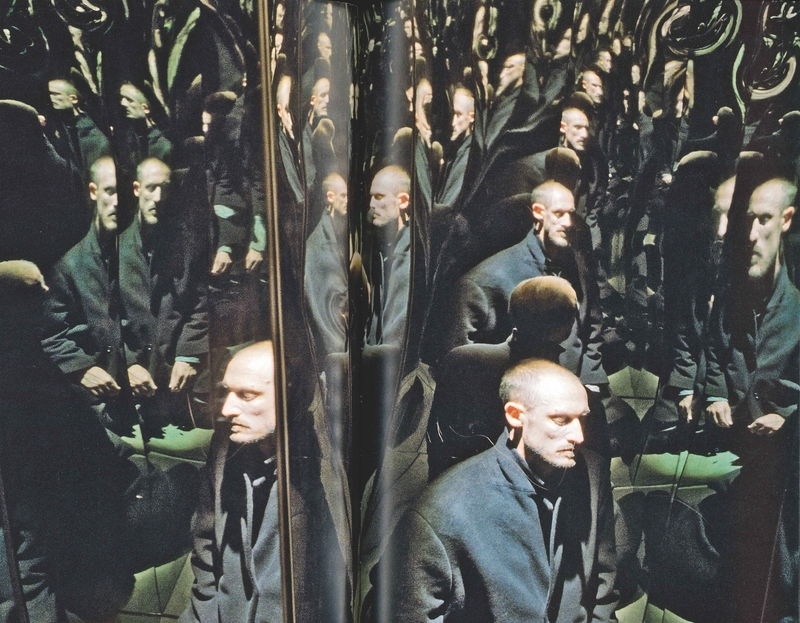 In 2011, as part of the Le Havre/New York-Regards croisés residency, French artist Sabine Meier (1964-) began a project to create a broad photographic portrait of Rodion Romanovich Raskolnikov. The location of New York provided a dynamic backdrop against which she could follow the protagonist and other characters, Sonia and Razumikhin, through a journey that is divided into three phases: the Looking Glass, Metamorphoses, and Apostle. The first exhibition was held at the Museum of Modern Art André Malraux, Le Havre in 2014, and was composed of 86 colour photographs and a supplemental slideshow of a further 230 photographs. Rather than remaining faithful to the novel, Meier strove to capture the inner workings of a man whose “mental space was constantly shifting as he ruminated to the point of exhaustion.”

The edition featured here includes select photographs and an extended interview with Meier by Martine Lacas. More than just a catalogue, it examines the literary heritage behind the project and has become a featured part of the exhibition as it tours Paris, Montpellier, and New York. Martine Lacas is a professor of history and art theory in Paris, and specializes in the field of literature through pictorial representation. 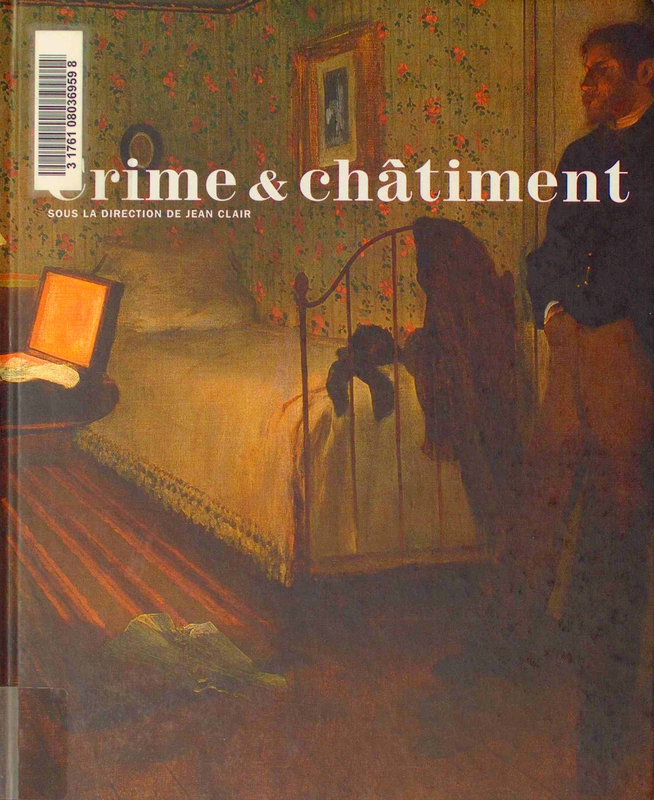 From March-June 2010, the Musée d’Orsay in Paris held an exhibition titled Crime and Punishment, which took its name from Dostoevsky’s novel and examined the theme of criminal characters in literature from 1791-1981. The dates coincide with L.-M. Lepeletier de Saint-Fargeau’s call for the abolition of the death penalty in 1791, and its eventual abolition in France in 1981. The works of Goya, Géricault, Picasso, and Magritte were used to trace the evolution of the criminal through the lens of scientific, psychological, and metaphysical debates about murder that took place during this turbulent period.

The project was the brainchild of French criminal lawyer, professor, and politician Robert Badinter, who spent his career opposing the death penalty as a member of the Socialist Party. It was, however, the essayist and art historian Jean Clair (pen name of Gérard Régnier), who served as curator to the exhibition, and who chose the Dostoevskian theme. The edition of the catalogue featured here includes a number of essays by leading French academics and artists. Such themes as Thou shalnt not kill, Figures of Romantic crime, and Justice, point towards Crime and Punishment as a work of central cultural importance in debates over criminality and the criminal.
← Case 1: Translations
Case 3: Literary Adaptations →
Case 2: Art and Illustrations