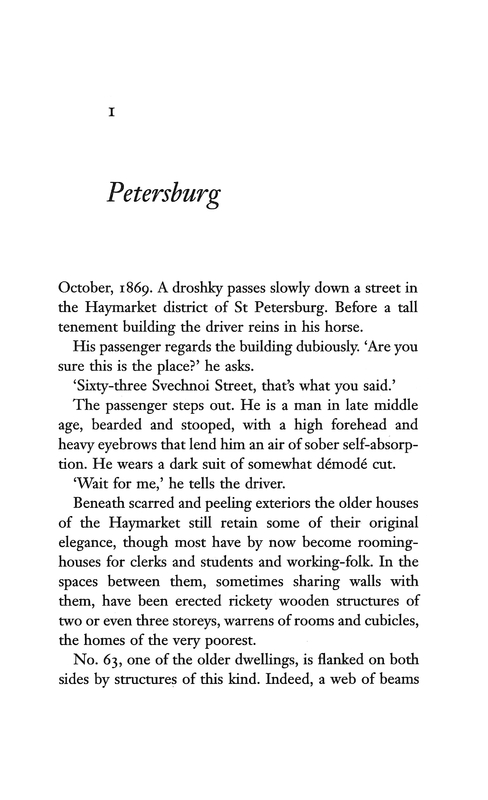 Published in 1994, J. M. Coetzee’s novel The Master of Petersburg features a fictional plot set in St. Petersburg with Dostoevsky as its protagonist. Coetzee draws upon the author’s biographical information, an omitted chapter from his 1872 novel Demons, and ongoing historical events. In the opening chapter, the novel begins in the familiar setting of Raskolnikov’s confession, the Haymarket, and traces the author’s return after the death of his stepson. What follows is a complex mix of facts and fiction about Dostoevsky’s life, rooted in a novel that confronts the themes of personal grief, political scandal, and spiritual searching.

John Maxwell Coetzee, born in Cape Town, 1940, is a South African novelist, essayist, and translator. He was awarded The Irish Times International Fiction Prize in 1995 for The Master of Petersburg, and received the 2003 Nobel Prize in Literature, making him the fifth African writer to be so honoured. A former Fulbright Scholar, Coetzee has taught English literature at the State University of New York at Buffalo and held the position of Professor of General Literature at the University of Cape Town from 1983-2002. 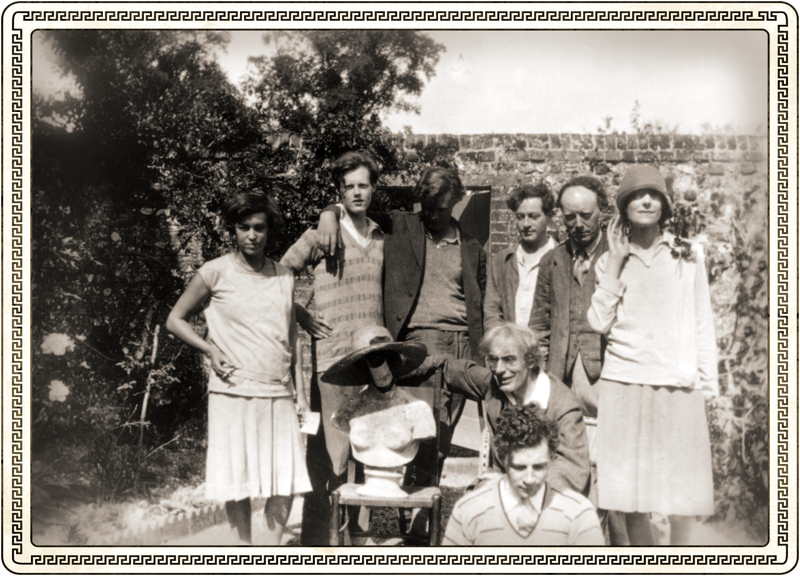 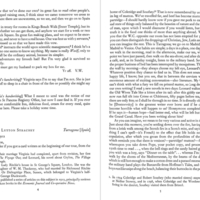 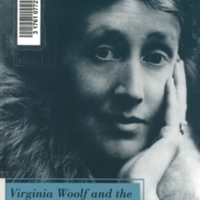 These two works provide an insight into the reception of Crime and Punishment in English intellectual circles at the beginning of the twentieth century. The famed Modernist novelist Virginia Woolf first remarked on Dostoevsky in a letter written while on her honeymoon, announcing after reading Crime and Punishment that, “it is directly obvious that he is the greatest writer ever born.” Scholar Roberta Rubenstein examines Woolf’s infatuation with the Russian author, tracing the three reviews Woolf wrote of Dostoevsky’s collected shorter fiction between 1917 and 1919, and exploring her 1922 translation, together with Samuel S. Koteliansky, of “Stavrogin’s Confession” from Dostoevsky’s Demons (1871-1872). Woolf concluded her commentary on Dostoevsky in her landmark essay of 1925, “The Russian Point of View,” remarking that the author pulled readers “Against our wills… blinded, suffocated, and at the same time filled with a giddy rapture.”

Virginia Woolf (1882-1941) was an English novelist, essayist, and critic, and an influential member of London literary society. She played a leading role in the Bloomsbury Group of intellectuals (pictured) which was a collective of friends and relatives who championed the importance of the arts in all its forms. Her most famous works include the novels To the Lighthouse and Orlando, and her landmark essay, "A Room of One’s Own." 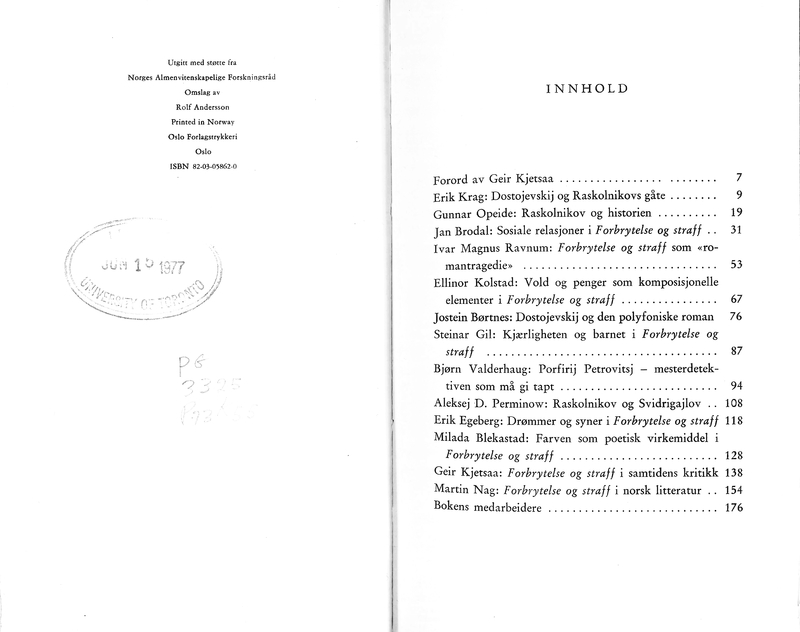 This Norwegian collection of literary criticism, titled Dostoevsky’s Novel about Raskolnikov, was compiled following the Autumn Seminar of 1971, held at the Slavic-Baltic Institute at the University of Oslo. The essays cover a broad range of themes related to Crime and Punishment, including “Violence and Money” (Ellinor Kolstad), “Dostoevsky and the Polyphonic Novel” (Jostein Børtnes), and “Crime and Punishment in Norwegian Literature” (Martin Nag).

The editor of this volume, Geir Kjetsaa, was a Norwegian professor of Russian literary history at the University of Oslo. He was also a celebrated translator, and author of several biographies of classical Russian writers, including Dostoevsky, Nikolai Gogol, and Leo Tolstoy. 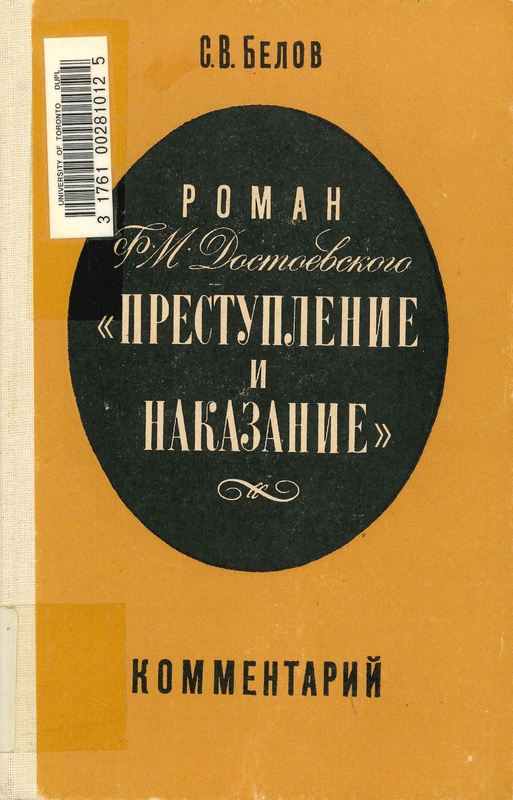 Originally published in 1977 during the late Soviet period, this Russian work is a study guide designed for teachers covering Crime and Punishment in their classes. Since the Soviet period, Dostoevsky’s novel has occupied a central position in the Russian school curriculum. The guide provides a close textual analysis of each part to the novel, providing historical context for 19th-century St. Petersburg, biographical information on Dostoevsky, and a thorough study of the author’s inclusion of Christian themes and imagery, rare during the Soviet period. This edition also features an extensive bibliography demonstrating the central place of Crime and Punishment in the Russian classroom, giving details of over twenty further classroom aides for teachers of all ages.

Sergei Belov is a Russian literary scholar whose main area of interest is the life and work of Dostoevsky. Following this first publication in 1977, Belov has published bibliographies, encyclopaedias, reference works, and biographical studies on Dostoevsky, The latest installment was published in 2011 and titled F. M. Dostoevsky: Index of Works of Fedor Dostoevsky and Literature about Him in Russian, 1844-2004. 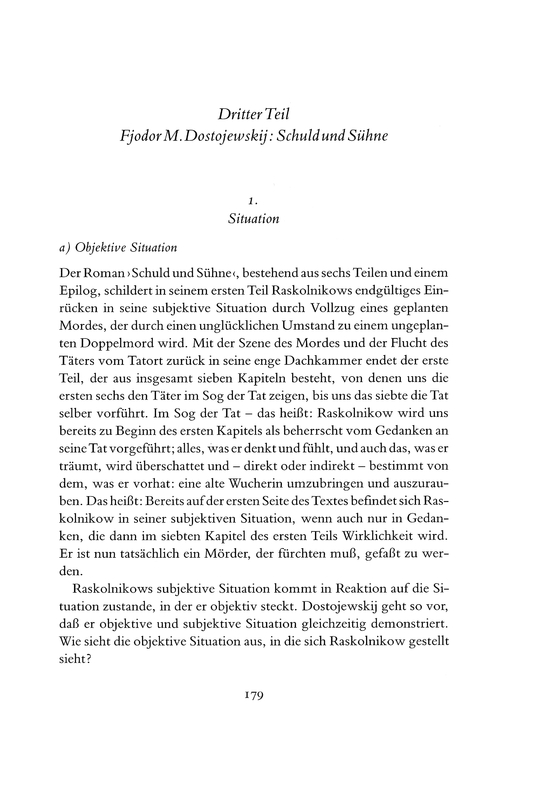 Horst-Jürgen Gerigk is a Professor Emeritus at the University of Heidelberg, literary critic, and leading voice of German Dostoevsky scholarship. Following the completion of his Habilitation in Russian literature, he cofounded the International Dostoevsky Society in 1971, of which he was president from 1998-2004, and has remained honorary president ever since. 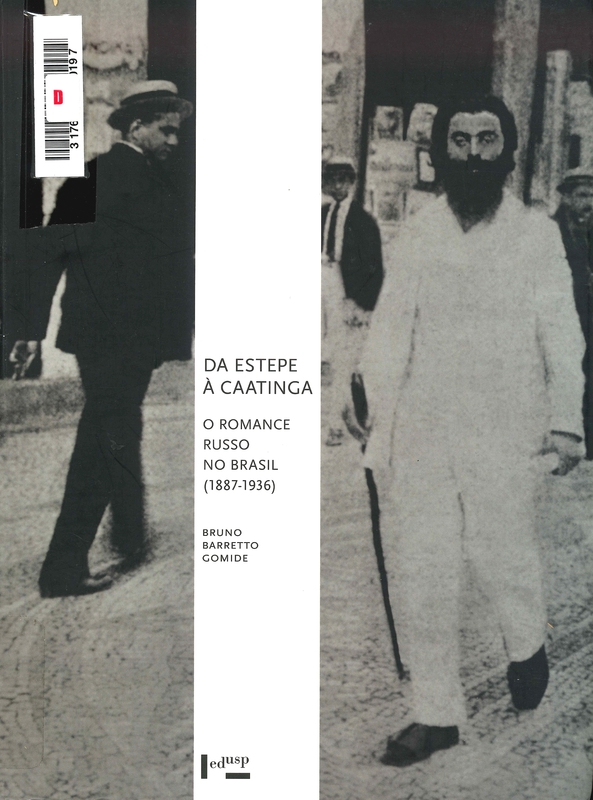 Published in 2011, this study of the reception of Russian literature in Brazil features a rich collection of essays published between 1887 and 1936 on the Russian novel. Dostoevsky repeatedly emerges as a cornerstone in literary debate in these essays, which offer a fascinating window onto intellectual life in Latin America at the turn of the twentieth century. He was also the subject of Brazil’s first essay on Russian literature, Clóvis Beviláqua’s “Russian Naturalism: Dostoevsky” from 1888. Throughout this collection, the writer is praised for his psychological insight, his lucid portrayal of suffering, and for presenting the foreign reader with a “total conceptualisation of the Russian soul” (Nilo Pereira, 1936).

This collection was compiled by Bruno Gomide, a professor of Russian literature at the University of São Paulo, Brazil. Gomide is a distinguished figure in Dostoevsky studies and belongs to a thriving department that boasts over 40 graduate students, and which represents the largest department of its kind in Latin America. The recent wave of translations produced by publishing house Editora 34 has resulted in a surge of interest in Russian literature, and promises a rich future for Dostoevsky scholarship across Brazil. 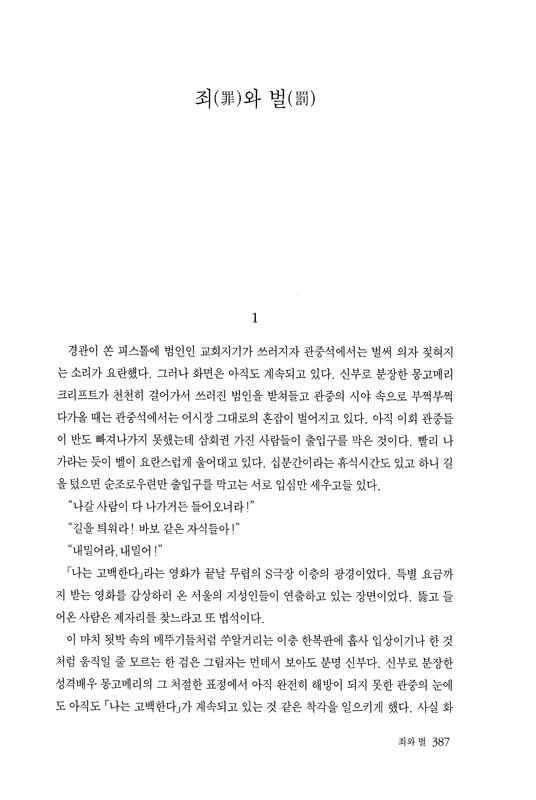 This collection of essays, written by Japanese literary critic Akiyama Shun, offers 48 chapters of scholarly commentary to Crime and Punishment. Such was the personal and historical significance of reading the novel for the author that it took decades to finally confront the text and embark upon a literary appraisal. Akiyama was 73 when he published this collection, after having first encountered the novel at age 15, when browsing a used bookstore in the days following Japan’s defeat in the Second Sino-Japanese War. The book, Uchida Roan’s 1892 translation, instilled in the critic a sleepless fervor that marked his first ambition to join the world of literature: “Something that I was searching and waiting for just called. I felt someone, Raskolnikov rather, was calling me.”

Akiyama Shun was born in Tokyo and graduated from Waseda University in 1953 with a degree in French literature. Between 1979 and 1993 he was a professor at the Tokyo University of Agriculture and Technology, and from 1997 at Musashino University. During his long career he was the recipient of numerous literary prizes, including the Gunzo Prize for New Writers in 1960, the Itō-Sei Literary Prize in 1990, and the Watsuji Tetsurō Culture Award in 2003. 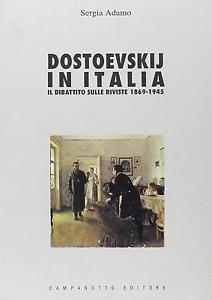 This study by Sergia Adamo provides a fascinating look at the reception of Dostoevsky in Italian literary journals from 1869-1945. It provides valuable material on the earliest discussion of the Russian novelist in continental Europe, and offers a great example of the contribution of Dostoevsky’s works to a nation’s cultural and intellectual development. Within its pages is a study of the first essay on Dostoevsky in Italian published anonymously in the Rivista Contemporanea in 1869, which offered the following review of Crime and Punishment:

Yet, despite the sad and painful impression that the book evokes, it will have a place among the literary works of our time and well deserves your attention; the killer’s psychology, which was conceived and examined by Dostoevsky, appears for the first time in literature and will remain for all of time the author’s greatest work.

Sergia Adamo is a professor in comparative literature and theory at the University of Trieste, Italy. Adamo began her career as a linguist and translator, working as lecturer of Italian language at the Moscow State Linguistics University in 1994. Since transitioning to the field of literature for her doctoral study, she has written extensively on the influence of Russian literature on Italian culture, and on the role of translation in shaping cultural identity. 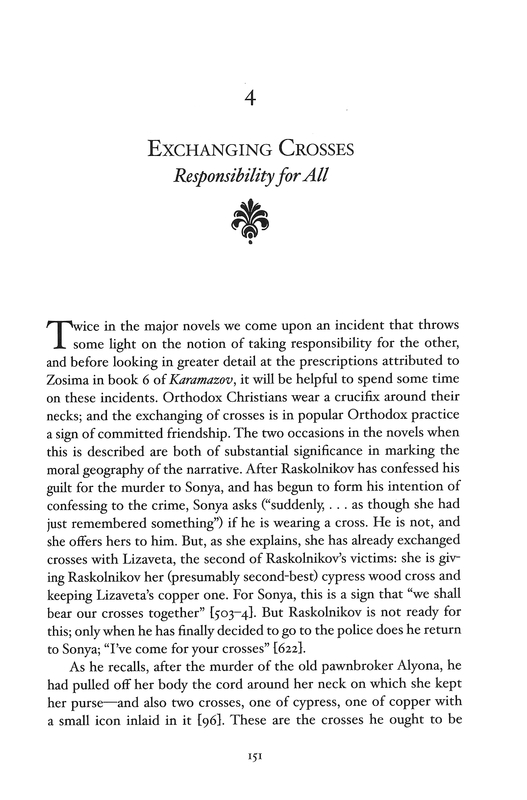 As the 104th Archbishop of Canterbury, Rowan Williams wrote this study on Dostoevsky in 2007 during a study leave from his post as leader of the Church of England. As the subtitle Language, Faith, and Fiction suggests, Williams presents a detailed study on how Dostoevsky’s works are relevant to modern-day Anglican theology. In the chapter, “Exchanging Crosses: Responsibility for All,” Williams focuses on the exchange of crosses by Sonia and Raskolnikov in Part 5, Chapter IV of Crime and Punishment, and examines what this signifies within the context of Orthodox faith and the commitment of friendship.

Rowan Williams, born in Swansea, Wales, in 1950, gained his Ph.D. in theology at Christ’s College, University of Cambridge, focusing on the teachings of Russian theologian Vladimir Nikolaevich Lossky (1903-1958). After stepping down as Archbishop in 2012, Williams took up the position of Master of Magdalene College at the University of Cambridge, and serves as chancellor to the University of South Wales.
← Case 4: Film, Stage, and Music
Global Contexts: Mapping of Exhibition Items →
Case 5: Critical Reception