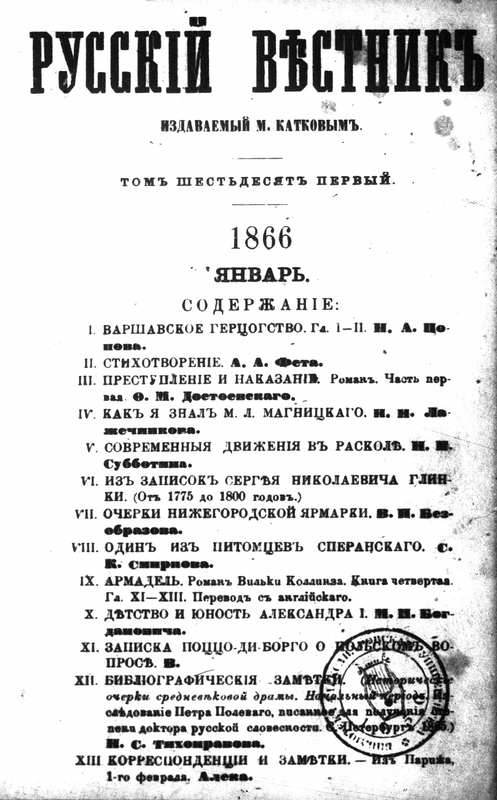 Dostoevsky’s Crime and Punishment was first published in the literary journal Русский Вестник (Russian Messenger), released in twelve monthly installments from January to December, 1866. Publishing thus in serial form was a common feature of 19th-century works of Russian literature, and it was only in 1867 that a separate edition to the novel was available.

The journal Russian Messenger was one of the most influential publishers of literature in mid-19th-century Russia. During the height of its influence from 1856-1877, it was led by editors Mikhail Katkov and Piotr Kudriatsev, and published prolifically on historical, political, and literary themes. Further works of Dostoevsky published in its pages include The Idiot (1868) and The Brothers Karamazov (1879-1880), and the journal was also the first publisher of Ivan Turgenev’s Fathers and Sons (1862), and Leo Tolstoy’s War and Peace (1865-1867) and Anna Karenina (1875-1877). 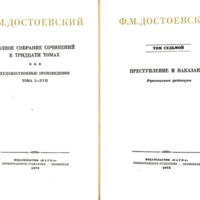 Volumes 6 and 7 from the collected works of Dostoevsky provide a wealth of materials relevant to Crime and Punishment. Volume 6 is comprised of the novel in its entirety, made up of six parts plus an epilogue. Volume 7 contains a wide selection of drafts for the novel, variants from manuscripts, and an extensive critical commentary on the novel’s formation.

Nauka, established in 1923 under the name of “USSR Academy of Sciences Publishing House,” is a leading Russian publisher of academic materials. Its chief production centres upon the publication of monographs, collected works, and reference books, and at the peak of operation in 1972 it published 135 scientific journals. 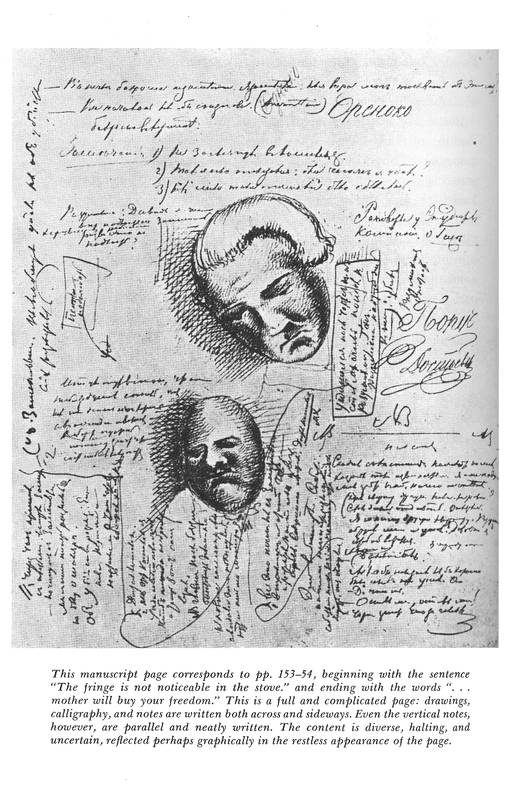 Dostoevsky conceived the idea for Crime and Punishment in the summer of 1865, and by December 1866 the last of 12 monthly installments of the novel had been published in the journal Russian Messenger. From September 1865 to February 1866, Dostoevsky filled three notebooks with sketches and plans for the work.

These notes reveal the novel developed in three key stages. The first stage was the first-person narrative of a man on trial, reflecting the author’s personal experience during the four months he was held at the Peter and Paul Fortress, St. Petersburg, between his arrest in April 1849 and his exile to Siberia seven months later. The second creative stage focused on the theme of drunkenness in contemporary society, as its early working title, The Drunkards (Пьяненькие), shows. The third and final stage in the novel’s evolution may have been inspired by the trial of Muscovite Gerasim Chistov, who in January 1865 killed two elderly women with an axe, and who was put on trial in August of the same year. Ultimately, the theme of drunkenness took on a secondary role in the novel, restricted to the realm of the Marmeladov family, and the reigning figure of Raskolnikov soon took shape.

This edition of the notebooks edited and translated by Edward Wasiolek was published in 1967. The book contains facsimiles of original pages from Dostoevsky’s notebooks, where a broad array of sketches can be found, as well as calculations of publication expenses, calligraphic exercises, and jottings on practical matters. The notebooks were originally published by I. I. Glivenko in 1931, ten years after their discovery by an Assistant Commissar of Education in the State Archives, Moscow. 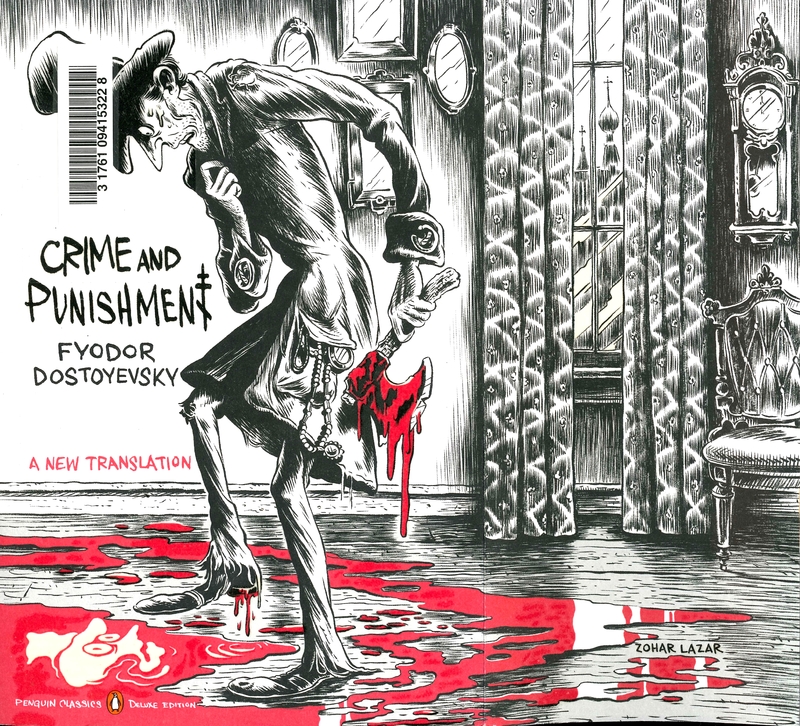 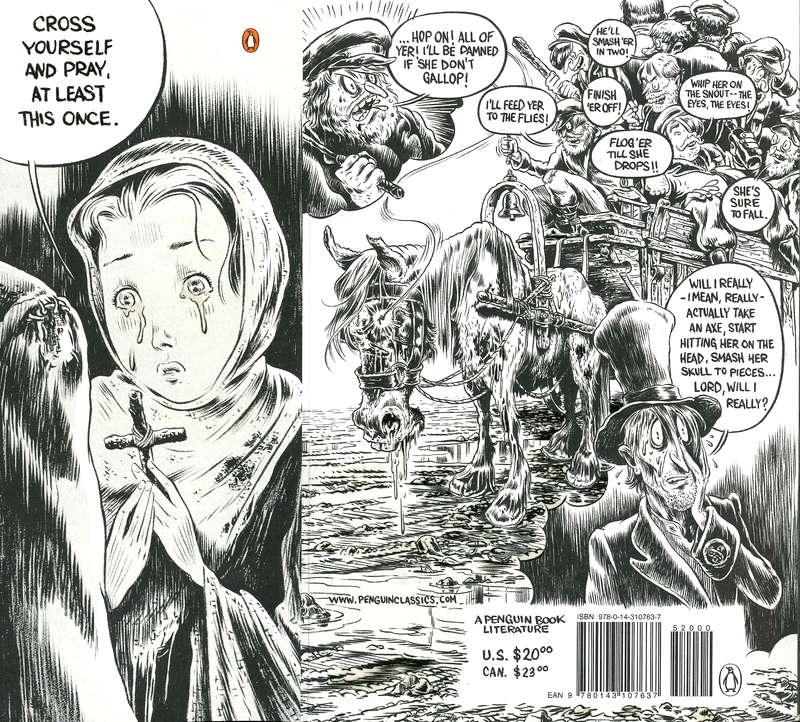 The 2014 translation for Penguin Classics represents the most recent contribution to the rich history of English-language translations of Crime and Punishment. The first translation of the novel was completed in 1911 for J.M. Dent & Sons by the Russian-born novelist and historian Frederick Whishaw, the first translator of Dostoevsky into English. There were nine other translations between Whishaw’s and Ready’s, the most notable being the 1914 benchmark translation by Constance Garnett, David Magarshack’s 1951 edition, and Richard Pevear’s and Larissa Volokhonsky’s 1992 translation. Ready’s translation has been hailed for its colloquial, compellingly modern text that stays unprecedentedly close to Dostoevsky’s original Russian.

Oliver Ready is Research Fellow in Russian Society and Culture at St Antony’s College, Oxford. His other translations include contemporary fiction, such as Yuri Buida’s The Prussian Bride and Vladimir Sharov’s Before and During. He is general editor of the anthology The Ties of Blood: Russian Literature from the 21st Century, and consultant editor for Russia, Central and Eastern Europe at The Times Literary Supplement. 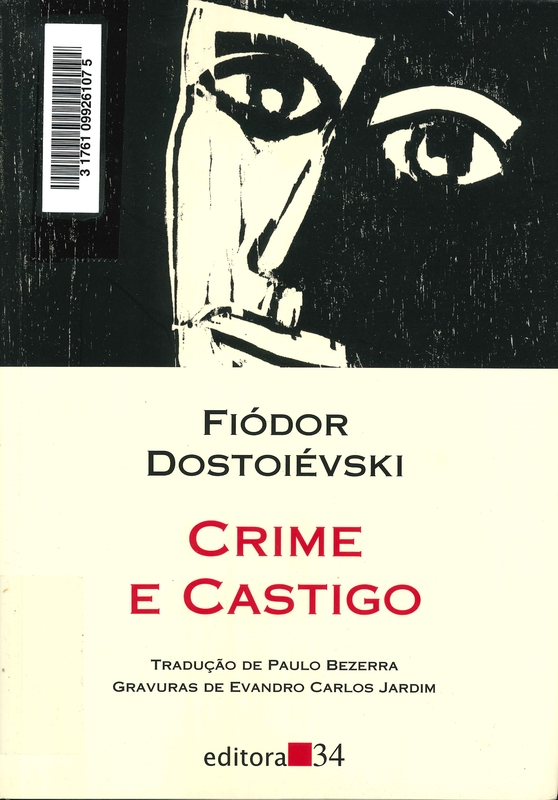 Paulo Bezerra’s 2001 Brazilian Portuguese translation is the first of its kind that draws directly from the Russian original. Published by Editora 34, this edition has been a resounding success and is now in its 6th reprint with more than 100,000 copies sold. It joins an extensive list of Brazilian translations of the novel, starting with Fernão Neves (pseudonym of Fernando Nery) 1920 edition translated from French. A subsequent serialization of the novel in the popular journal Manhã in 1925 by Câmera Lima, and a further seven editions sourced their translations either from French, Spanish, or English editions of the novel.

Paulo Bezerra, born in 1940 in Paraíba, Brazil, is a translator and literary critic known for his work on Fyodor Dostoevsky. Having studied Russian language and literature at Lomonosov Moscow State University, he worked as a professor of literary theory at the State University of Rio de Janeiro, before joining the University of São Paulo as professor of Russian language and literature. Bezerra is highly decorated for his Russian translations, and following this 2001 edition of Crime and Punishment, he went on to translate Dostoevsky’s The Idiot and Demons in 2003, The Brothers Karamazov in 2008, and, most recently, The Adolescent in 2015, all with the publishing house Editora 34. 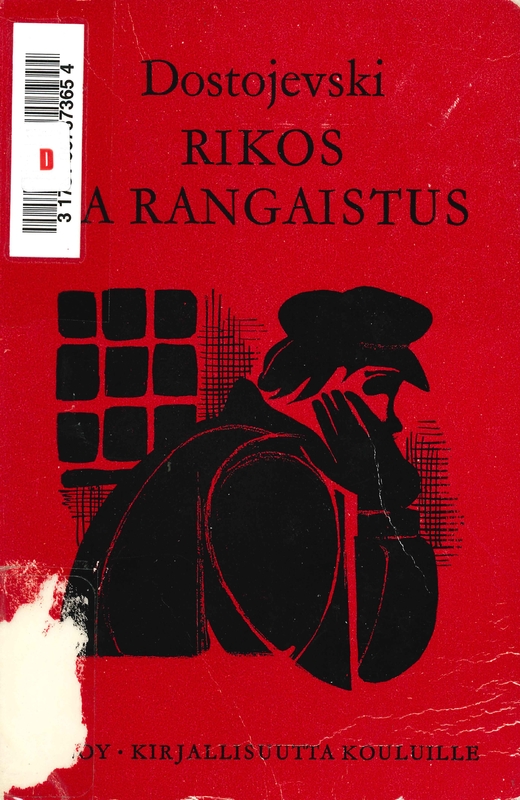 This Finnish translation of Crime and Punishment was published in 1967 in Helsinki by Werner Söderström Osakeyhtiö publishing. Translated by Juho August Hollo, it is only the second rendition of Dostoevsky’s work in Finnish, following the acclaimed 1907 edition published by Satamatyömiehen Osuuskunta, which ran for 15 editions.

Juho August Hollo (1885-1967), born in Laihia, Finland, was a professor at the University of Helsinki from 1930-1954, and one of the nation’s most prolific translators. Following his work of translating a collection of speeches by American philosopher and psychologist William James in 1913, Hollo went on to translate over 200 books from various languages including German, Swedish, Russian, and French. Other Russian translations by Hollo include Alexander Pushkin’s Dubrovsky, Nikolai Gogol’s The Government Inspector, and Leo Tolstoy’s Family Happiness. 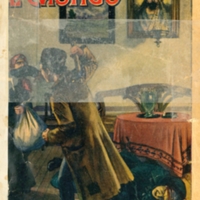 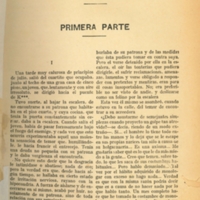 This Spanish edition of Crime and Punishment was published in 1917 in Madrid, and translated by Pedro Pedraza y Páez. It was the second Spanish translation after Francisco Fernandez Villegas’ 1901 edition. Páez’s version was published by the ground-breaking publishing house Ramón Sopena, established in 1894 by Ramón Sopena López. The novel formed part of the publisher’s “Biblioteca de grandes novelas” series, which produced translations of leading works of classical literature, including novels by Jules Verne, Victor Hugo, Jonathan Swift, and Edgar Allan Poe.

Pedro Pedraza y Páez (1877-?) was a distinguished author and translator. During his extensive career he translated works into Spanish from French, German, Italian, English, Russian, and Polish. Notable translations of his include Walter Scott’s Kenilworth, D. S. Merezhkovskii’s The Death of the Gods: Julian the Apostate, and Henryk Sienkiewicz’s Trilogy. 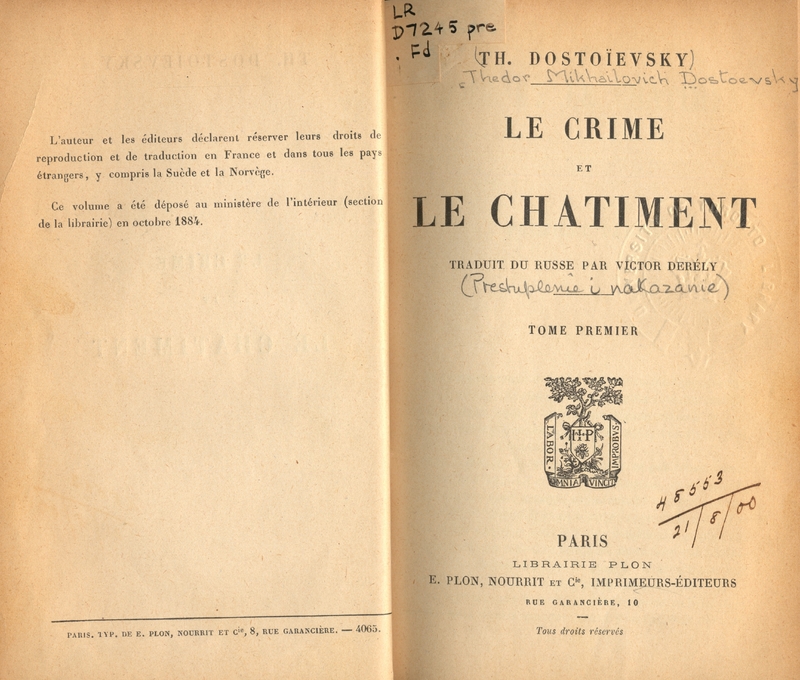 The translation featured here is the first edition of Crime and Punishment to be published in French. This translation marked both a watershed moment in the reception of Dostoevsky’s works in France, and served as a source text for many other translations across the globe. To this day, it remains the most widely published edition of Dostoevsky’s work in the Francophone world. It was reissued recently in 2013 in Montreal by Les Éditions Caractère Inc., and in 2015 in Belgium by Ligaran publishers.

Victor Derély (1840-1904) was a French scholar and translator who specialized in Russian literature. After graduating from the École Normale Supérieure in Paris, Derély made a name for himself with his work on Dostoevsky and Aleksey F. Pisemsky. His translations of Dostoevsky’s other novels include The Idiot, Demons, and Poor Folk. 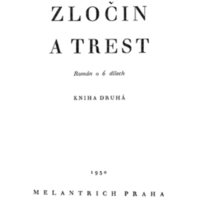 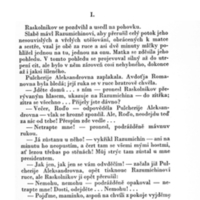 This Czech translation of Crime and Punishment was published in Prague, in 1930, during the period of the First Czechoslovak Republic. This edition, published only one year after the first Czech edition of the novel appeared in Czechoslovakia, continued for an enduring run of 28 editions. Under the editorial guidance of the great Czech literary critic and writer František Xaver Šalda, this publication was part of the “Melantrichova knižnice” series of translations, which included works like Leo Tolstoy’s Anna Karenina, Gottfried Keller’s Green Henry and Honoré de Balzac’s Eugénie Grandet and La Cousine Bette.

The translator of this edition, Břetislav Hůla (1894-1964), was a political activist and translator of Russian and German fiction and political literature. Among his other translations from Russian are Dostoevsky’s Brothers Karamazov and Ivan Turgenev’s novella Mysterious Tales. Hůla spent time in Kyiv and Moscow contributing to the émigré-POW journal Čechoslovan in 1917. From 1921 he was as an active member of the Communist party. He worked as editor for Rudé právo (The Red Truth) from 1922 to 1926, until he was expelled from the Communist party in 1926 because of his supposedly right-wing politics. 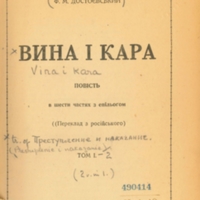 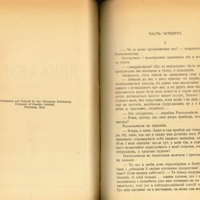 The edition featured here is a Canadian edition of a Ukrainian translation of Dostoevsky’s novel that was first published in serial form in the newspaper Український голос (Ukrainian Voice) in Winnipeg, Manitoba in 1927-1928. Founded in 1910 by leading journalist and activist Taras Ferley, the newspaper focused on education, economics, and politics, and emerged as a strong advocate for the independence of Ukraine and a prominent voice for the Ukrainian Orthodox movement in Canada. The newspaper was established by the Ukrainian Publishing Company of Manitoba, which published this collected edition of serial translations in 1928.

The translation was made from Russian by Mykhailo Podolyns’kyi (1844-1894), born in the Dolyna region of Galicia. Publicist, translator, and community activist, he was a founder and leader of the Sich student society in Vienna. He taught in gymnasiums in Lviv and Brody, and contributed to the newspapers Pravda, Dilo, and Zoria. He wrote pedagogical essays, literary and art criticism, and translated from Russian, Italian, and French.
Case 2: Art and Illustrations →
Case 1: Translations