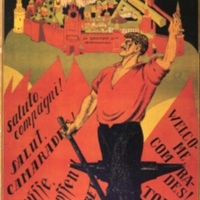 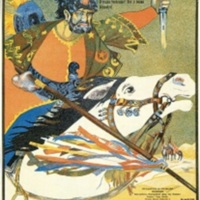 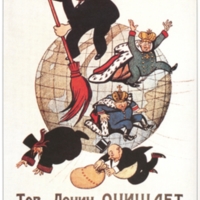 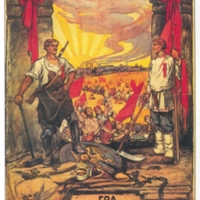 In Soviet Russia, the 1st of May was celebrated as the Day of the First International from 1918-1930 and, since 1930, as a day of international solidarity among workers. In posters, the red flag served as a symbol of dynamism and elemental force. It was often combined with imagery of the Earth and torn chains in order to emphasize the international character of the proletarian revolution. Another popular motif was the figure of a blacksmith, meant to symbolize the transformative powers of the working classes. Finding accessible images and languages with which the “masses” could identify was one of the tasks of the early Soviet poster designers.  Dmitri Moor’s poster “Comrades Muslims” appealed to volunteers to join the southern campaigns of the Red Army in 1919. Unlike Moor’s “heroic” imagery, another leading poster artist, Viktor Deni, utilized caricature style. One of his more famous posters  reads: “Comrade Lenin cleans up the Earth from scum” (1920). 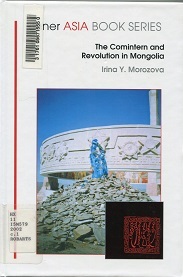 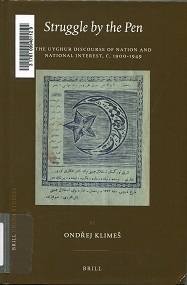 Before the Russian Revolution, the number of Chinese subjects in Russian territories was estimated to be 60,000. They were mostly contract workers employed in the mines, railroads, and trades. Many volunteered in the Red Army; among the largest contingents were the Chinese battalion of the Tiraspol’ detachment and the Red Chinese Detachment. For the Soviet Union, control over its contested far-eastern border, was instrumental for spreading communism in Central Asia, with Mongolia carrying strategic importance in the USSR’s relations with China. Several recent studies of the Uyghurs, the Turkic-speaking Muslims of Xinjiang, have addressed how the history of this border region between China and Russia intersected with the history of the Soviet Union. 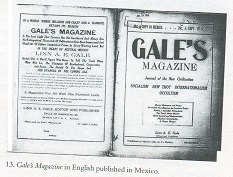 The opening of the archives in the Soviet Union changed the trajectory of Cold War scholarship that had prioritized the Russian scenario and positioned similar revolutionary developments as orchestrations by the Bolsheviks. As the archives in the Soviet Union became publicly accessible, more nuanced views on other origins and causes became possible. Writing about the impact of the October Revolution on Mexico, Daniela Spenser suggests that “prior to the outbreak of the Bolshevik Revolution, Mexico already had its own experiences with trade union organization and internationalism ever since Mexicans, Latin Americans, and Americans found themselves together in the workplace, in unions, and in strikes in both countries” (2011, 90-91). 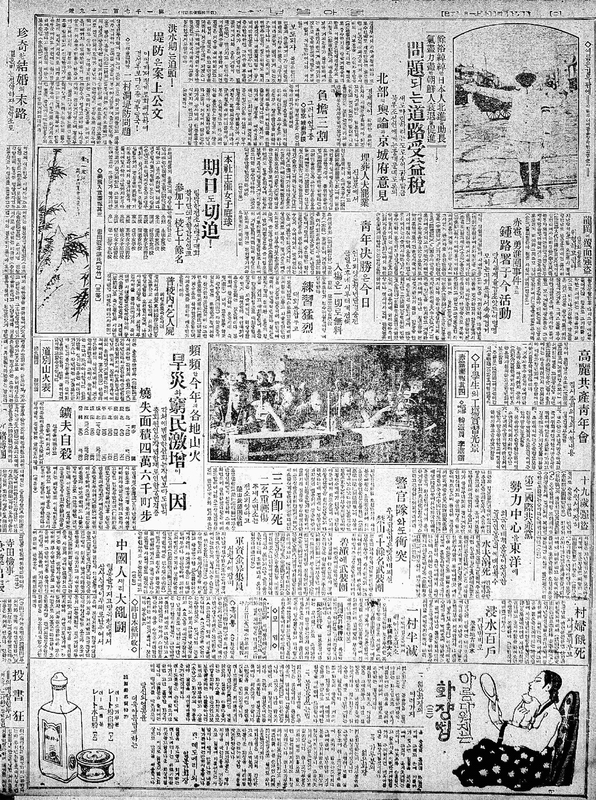 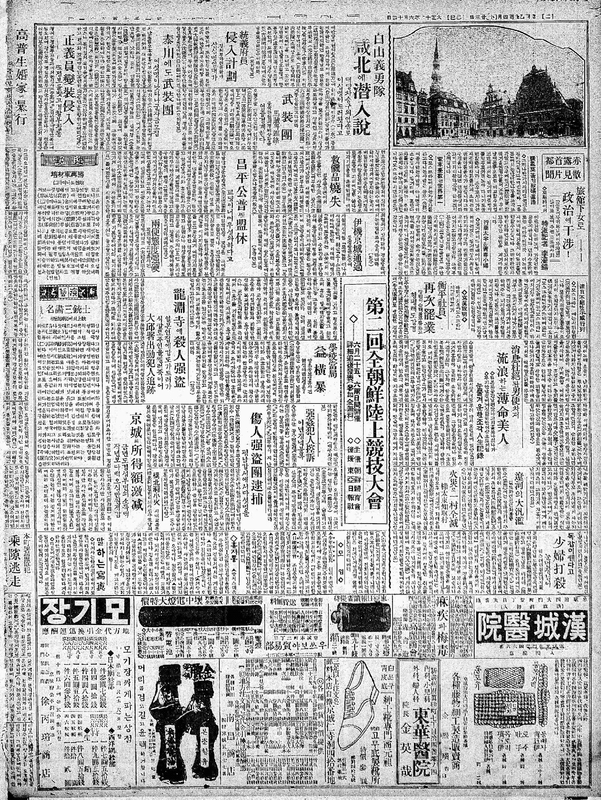 Following the annexation of Korea by Japan in 1910, thousands of Koreans were forced out of their land; many migrated to Russia and became loyal to the Bolsheviks. In the First World War, four thousand Russian-Koreans served in the Red Army.

Yi Gwanyong, who was educated at Oxford University in the United Kingdom, was Dong’a ilbo’s first Moscow correspondent. The Dong’a ilbo was one of a number of new independent Korean-language newspapers that the Japanese government allowed to be established after the massive uprising of 1919 in its Korean colony. During this early period, it was quite eclectic politically, and could publish quite freely if it did not advocate directly for revolution, either nationalist or socialist. Yi Gwanyong himself was a neo-Kantian philosopher and an influential moderate nationalist and journalist, but he also worked closely with Korean leftists. 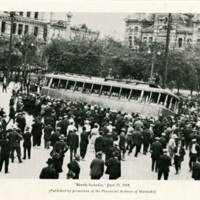 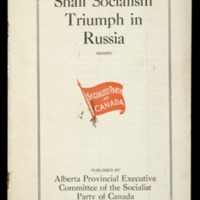 Shall Socialism Triumph in Russia 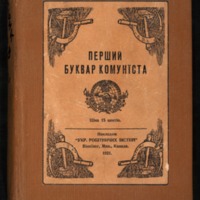 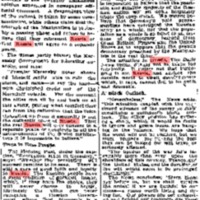 Canada’s intervention in the Civil War in Russia came to be known as the Siberian Expedition; more than 4000 Canadian troops became deployed. However, there was dissent among the troops, and  most of the troops never participated in fighting. As historian Benjamin Isitt argues, “Ambivalence in Allied strategy prevented their deployment into the interior of Siberia, ‘up country” to the Ural Front, where White Russian and Czecho-Slovak troops fought the Red Army. Most of their time was spent training White Russian officers and conducting guard duty and routine security operations around Vladivostok-responding to looting, theft, assault, and murder in the port city” (Isitt 2010, 3). The response of the Canadian labour movement to the Siberian Expedition has been little studied. There is also still debate among historians whether the six-week long Winnipeg general strike of 1919 was a fairly localized reaction to local economic conditions or whether it had broader implications for leftist politics in Canada. 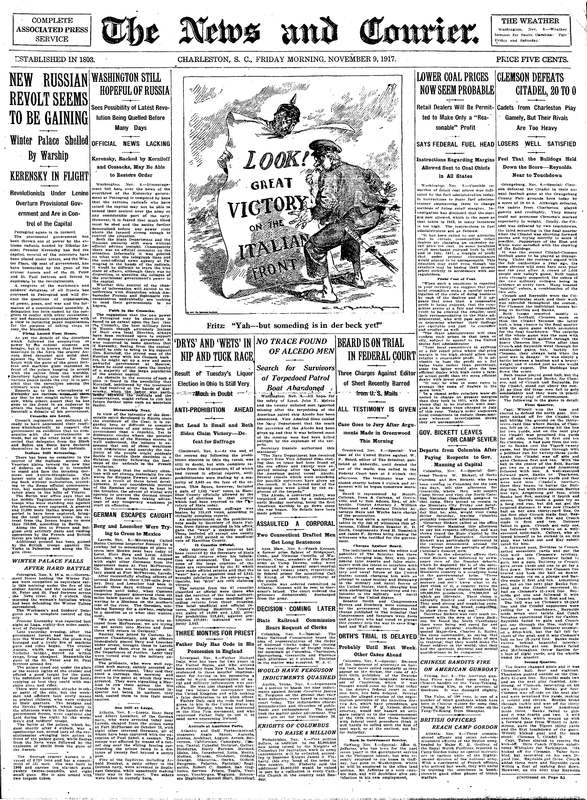 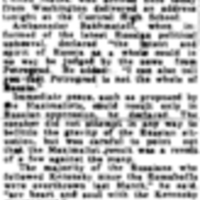 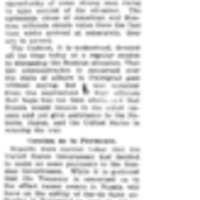 The immediate American press reaction to the overthrow of Kerensky’s government was that of disbelief, alarm, and hope that the crisis was simply temporary. It was not until winter of 1917 that the French and British agreed that communication should be established with the new Bolshevik government. Following the Brest-Litovsk Treaty with Germany, the Allies intervened in Russia. The United States (under President Woodrow Wilson) and Japan sent troops to Siberia.