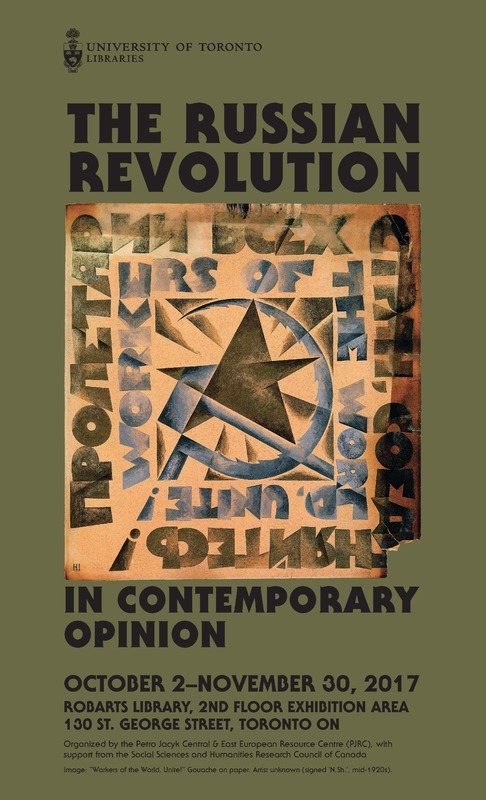 2017 marks the centennial of the October Revolution in Russia. To observe the occasion, the Petro Jacyk Central and East European Resource Centre at the University of Toronto Libraries  organized an exhibition titled “The Russian Revolution in Contemporary Opinion.” The displays were installed in four arched rows (approximately forty cases, each accompanied by a caption) in the north and south porticos on the second floor of the Robarts Library during October and November 2017.

The exhibition on contemporary reactions to the Russian Revolution highlighted and promoted the variety and depth of the library’s holdings in different languages on this topic, with especial focus on primary sources, such as newspaper reports, pamphlets, photographs, posters, and memoirs. This online version includes highlights from sections organized around four broad themes: Historical Context of the Russian Revolution; Internal Responses and Parallel Developments in the Former Russian Empire and East and Central Europe; Eyewitness Accounts and Popular Responses to the Russian Revolution; and Global Responses. Through eyewitness accounts, leaflets, and propaganda art, the library material demonstrates how the Russian revolution inspired, shaped, and effected other countries and the lives of various individuals and social groups.

The exhibition was curated by Natallia Barykina. The curator would like to thank Ksenya Kiebuzinski for her considerable assistance, as well as for her description of items on display about Ukraine; Professors Lynne Viola and Lucan Way for their expertise; Graham Bradshaw for suggesting sources on Canadian involvement in Russia; Young-Hwa Hong for providing and describing sources on Korea; Barnabas Kirk for his research on U.S. newspapers; Wasyl Sydorenko for editorial and design assistance; Maureen Morin for the poster design; and Leslie Barnes for her assistance with this online version of the exhibition.

The Historical Context of the Russian Revolution →
Introduction and Credits