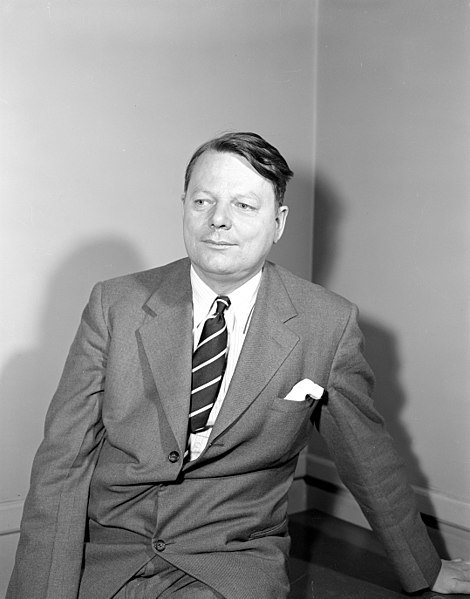 "J.W. Pickersgill" is licensed under CC BY 2.0, courtesy of Library and Archives Canada.

John Whitney "Jack" Pickersgill (1905-1997) was a Liberal civil servant and politician. Raised in Ashern, Manitoba, Pickersgill began his career as a history teacher at Wesley College before joining the Department of External Affairs in Ottawa in 1937. Pickersgill is best known for his work in the Prime Minister's office, serving first as Assistant Private Secretary to Prime Minister Mackenzie King before becoming Special Assistant to the Prime Minister in 1945. Pickersgill retained this role under the administration of Louis St. Laurent and became Clerk of the Privy Council in 1952. He also served as an MP for Bonavista-Twillingate, Newfoundland from 1953 to 1967 and served as Secretary of State and Minister of Transport in Lester B. Pearson's cabinet before leaving politics in 1967 to become the president of the Canadian Transportation Commission.

John Pickersgill discusses his career with Richard Alway. Major topics of conversation include Pickersgill’s political upbringing and early career, his experience working under the different personalities and leadership styles of three prime ministers - Mackenzie King, Louis St. Laurent, and Lester Pearson – as well as Pickersgill’s own leadership experiences as an MP. He also discusses Canada’s regional and national identities, the impact of Quebec separatism across the country, and Canada-US economic relations.

Pickersgrill describes joining the Liberal Party after his Conservative upbringing, his early career, and the challenges of working with Mackenzie King.

Pickersgill discusses the contrast in temperament and leadership styles between Prime Ministers Mackenzie King and St. Laurent, and how he was approached to run for office in Newfoundland.

Pickersgill recounts his decision to run for MP of Newfoundland, his tour and reception throughout the province, the pipeline controversy, and losing the PM election to John Diefenbaker.

Pickersgill shares his thoughts on a range of subjects including the French separatist movement, national identity and the CBC, economic identity, regionalism, and urban and rural growth.