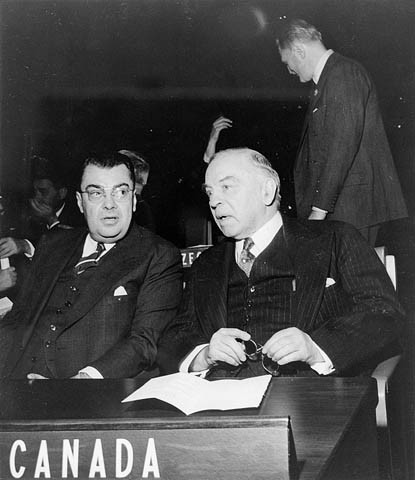 "Paul Martin with Mackenzie King" is provided courtesy of Library and Archives Canada.

Joseph James Guillaume Paul Martin (1903-1992), known as Paul Martin Sr., was a Liberal politician. Raised in Pembroke, Ontario and awarded with a law degree from the University of Toronto, Martin was first elected to the House of Commons in 1935. He entered federal cabinet in 1945 and served under four different prime ministers, most notably as the Minister of National Health and Welfare (1946-1957) and the Secretary of State for External Affairs (1963-1968). Martin served as the Senator for Windsor, Ontario from 1968-1974 while also assuming the roles of Commissioner to the United Kingdom and Chancellor of Wilfrid Laurier University during the early 1970s. Martin retired as a political science professor at the University of Windsor and was awarded the title of Right Honourable in 1992.

Martin outlines his career and discusses his upbringing. He describes his early campaign efforts and the experience of entering postwar government reconstruction under Mackenzie King with the agenda of creating public health insurance.

Martin discusses his participation in the United Nations during the late 1940s, his experience as Diefenbaker's opposition, his role in de-escalating conflict in Cyprus and his role in the UN.

Martin elaborates on conflicts at the UN, describes his 1968 Senate leadership and its difficulties, his respect for the Prime Ministers that he served, the significance of minority governments and the trend of town meeting politics.

Martin summarizes the ways in which be believes Canada progressed in the 40 years he was in politics.