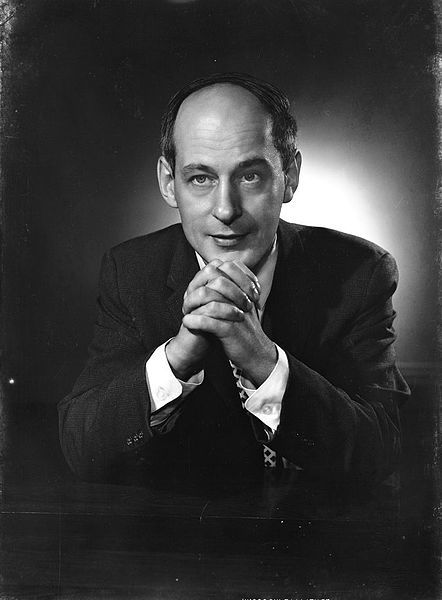 René Lévesque (1922-1987) was the 23rd Premier of Quebec (1976-1985) and founder of the Parti Québécois (PQ). Raised in New Carlisle, Quebec, Lévesque became a war correspondent for the US Army during the Second World War and returned home to pursue an international career with the French CBC. His involvement in the CBC labour strike of 1958 alongside his reporting of the corruption associated with the Duplessis government led him to join the National Assembly of Quebec with the Liberal Party in 1960. In 1967, he founded the Mouvement Souveraineté-Association, which led to the formation of the Parti Québécois in 1968. Lévesque led the PQ until 1985 while also serving as Premier of Quebec beginning in 1976. As Premier, he is best remembered for introducing the Quebec Charter of the French Language (also known as "Bill 101"). Lévesque resigned from politics in 1985 and was posthumously appointed to the National Order of Quebec in 2008.

Opening with a quote form Lévesque's 1968 book on An Option for Quebec, interviewer Richard Alway sets the stage for an in-depth discussion on Quebec separatism. Lévesque describes the creation of the Parti Québécois and its implications for the future of French- and English-Canadian politics. In Part 1, he provides an overview of the history of Quebec that lead to its separatist identity, including shifts in industry and religious life. Lévesque discusses the parallels between his childhood as a French minority in Gaspé and the emerging identity of Quebec in the Quiet Revolution, as well as the French-English relations in his small town versus those at the provincial and national levels. Lévesque also comments on the Quebecois experience of the Second World War, including conflicts of patriotism, efforts to avoid conscription, and his own experiences as a soldier for the US army. In Part 2, the discussion shifts to Lévesque’s involvement in Quebec politics, beginning first as a journalist following international affairs before he learned about the corruption that existed under the Duplessis government. Lévesque comments on his early experience as a minister for the Lesage government before discussing his accomplishments as Premier of Quebec and his projections on evolving Quebecois identity and the possibility of future succession.

Part 1 of the unedited interview covers Lévesque's early life and views on Quebec culture and identity.

Part 2 of the unedited interview focuses on Lévesque's political career and opinions about Quebec sovereignty.