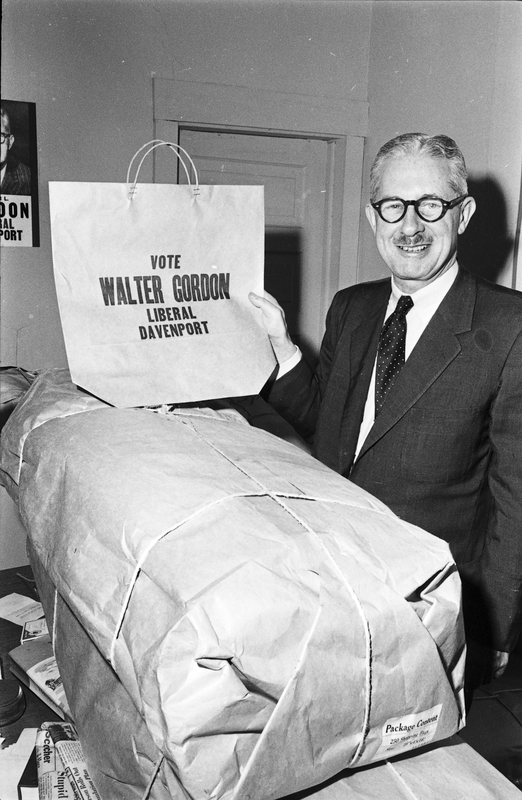 Walter Lockhart Gordon (1906-1987) was a Liberal politician and accountant. Born and raised in Toronto, Gordon attended Royal Military College and worked for his family's accounting firm before serving as a special assistant to the deputy Ministry of Finance during World War II. From 1955-1957, Gordon chaired the Royal Commission on Canada's Economic Prospects, which questioned the role of foreign businesses in advancing the Canadian economy. Gordon was elected as the MP for Davenport, Toronto in 1962 and served as the Minister of Finance from 1963-1965, during which time he was known for his promotion of both economic nationalism and social programs. In 1968, he left politics to return to business, where he remained invested in Canadian nationalism. Gordon also served as chancellor of York University from 1973-1977 and was appointed to the Order of Canada in 1976.

Gordon discusses his views on Canadian economic nationalism with interviewer Richard Alway. Topics covered during the interview include Gordon's observations of the strong influence of American business in Canadian politics, whether he believes it possible to maintain a pro-Canadian approach to politics without being anti-American, and his unusual advocacy as an economic nationalist for mixed enterprise and strong social programs. Gordon also discusses his introduction to politics as a campaign manager for Pearson, his admiration for Prime Minister Louis St. Laurent, and the future of economic growth in the Prairies and Maritimes.

Contains the contents of the edited interview, while also expanding on Gordon's upbringing and his campaign experience.