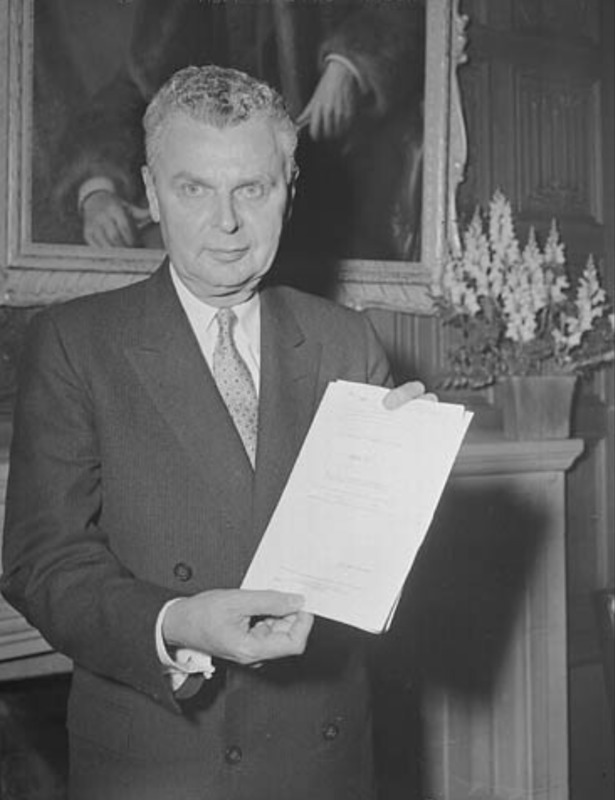 John George Diefenbaker (1895-1979) was a Progressive Conservative (PC) politician and the 13th Prime Minister of Canada (1957-1963). Born in Neustadt, Ontario but raised in Saskatchewan, Diefenbaker served in World War I and became a criminal defence lawyer before he was elected to the House of Commons as the MP for Lake Centre, Saskatchewan from 1940 to 1952. Diefenbaker became the leader of the PC Party of Canada in 1956 and won the federal election in 1957 against Lester B. Pearson. During his time as Prime Minister, Diefenbaker passed the Canadian Bill of Rights, granted voting rights to First Nations peoples, and was noted for his anti-American economic policies and his strong support for the Commonwealth. Diefenbaker lost his bid for re-election in 1963 after controversy over his cancelling the Avro Arrow jet aircraft and his opposition to nuclear weapons in Canada during the Cold War. He continued to lead the PC Party until 1967 and was involved in politics for the remainder of his life.

The interview was produced as two commercial tapes labelled Parts 1 and 2. In Part 1, Diefenbaker recounts his early life including his family's move to Saskatchewan, his World War I service and his decision to study law. Diefenbaker also describes how he came to identify as a Conservative, as well his rough start to politics and the eventual turnaround of the PC Party helped in part by his platform vision of "one equal Canada". Part 2 covers a wide range of topics including Diefenbaker's victory in the federal election of 1958, his role in South Africa's withdrawal from the Commonwealth, and his pride in forming the Canadian Bill of Rights. Diefenbaker also discusses his reverence for the Commonwealth, the dangers of US economic influence in Canada, and his interactions with Dwight D. Eisenhower and John F. Kennedy. The interview concludes with Diefenbaker's commentary on his favorite politicians in history.

The second Diefenbaker tape covers a range of highlights from his political life.