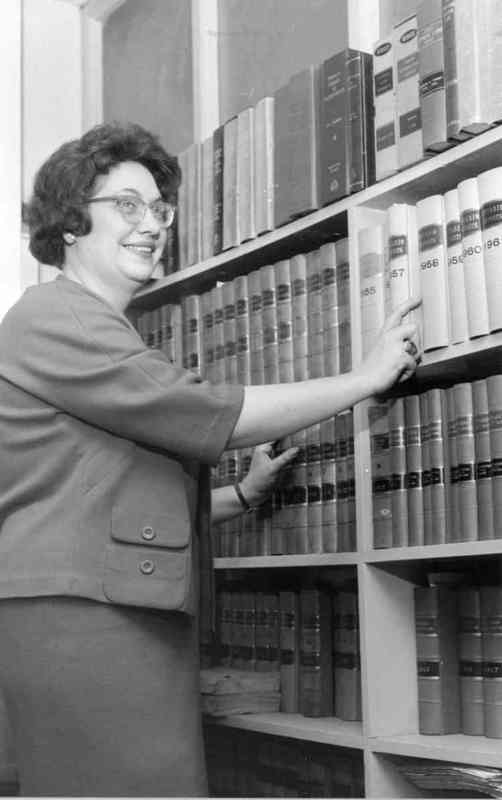 "The Honourable Judy LaMarsh shortly after being sworn in as Canada's Minister of National Health and Welfare" is provided courtesy of Niagara Falls (Ontario) Public Library.

Julia "Judy" Veralyn LaMarsh (1924-1980) was a Liberal politician, lawyer, broadcaster and author. Born in Chatham, Ontario and raised in Niagara Falls, LaMarsh served in the Canadian Women's Army Corps as an Intelligence Officer and worked as a lawyer before being elected to Parliament in 1960 as an MP for Niagara Falls. Best known as the Minister of Health and Welfare in the Pearson cabinet, LaMarsh led the creation of Medicare and the Canadian Pension Plan, and also oversaw Canada's Centennial celebrations as the Secretary of State (1965-1968). After retiring from politics in 1968, LaMarsh worked as a civil lawyer, as a broadcaster on both the CBC and for her own shown Judy, and wrote the book Memoirs of a Bird in a Gilded Cage (1969). LaMarsh was awarded the Order of Canada for her service in both the public and private sectors.

Richard Alway interviews Judy LaMarsh on her experience as a woman in Parliament during Lester Pearson's administration, as well as her accomplishments as the Minister of Health and Welfare. LaMarsh reflects on her career, while also describing the then-current challenges of governing Canada in relation to geographic disparity and cultural French-English divides. Highlights include discussion around the women's movement in Canada, LaMarsh's participation in the 1963 federal election’s “truth squad,” and the inspiration and trials behind implementing universal medical coverage and the Canadian Pension Plan.

LaMarsh reflects on her early career trajectory, including the challenges of working in law and Parliament before the cusp of the women's movement in Canada. She describes her upbringing, her military experience, and her early interest in politics.

LaMarsh describes her campaign for MP of Niagara Falls and her role on the "truth squad" during the election of 1963. She details the era of Pearson's administration and the challenges of implementing Medicare and the Canadian Pension Plan.

Lamarsh discusses her memoirs, her thoughts on the cabinet system and its responsibiity to unite the Canadian provinces, as well as her reflections on her career as a whole, including plans for her future.