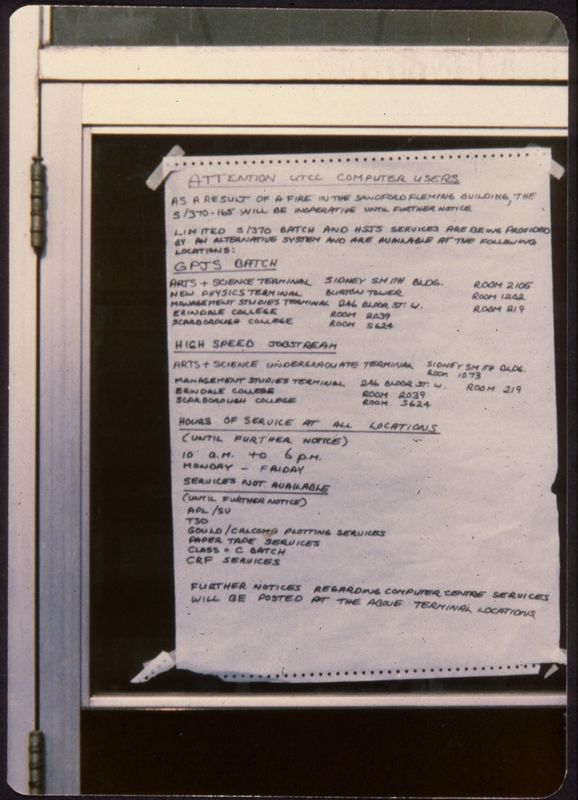 It all began in the wee hours of Friday, February 11, 1977, when our console computer operator, Nancy Okada, heard a fire alarm go off. It was practice in those days to evacuate the building, but leave the computer up and running so that users accessing the computer remotely could keep on using it, and yes it was available around the clock. Once smoke was detected, it became obvious this was not a false alarm, so she contacted Rein Mikkor, who was then Acting Director of UTCC. Firemen began to arrive. The firemen confirmed that there was indeed a fire and began to extinguish it. The computer was powered down. The firemen brought in tarpaulins to cover the many cabinets that comprised the mainframe system and its peripherals to minimize water damage. Mikkor arrived and was concerned about the tape library, that contained the research data of many of the research users of the computer. There were thousands of such tapes. It would be a monumental task to move them. He thought of using coat trees, minus the hooks, to thread as many  tapes as could be carried onto the coat racks and carry them to the Engineering Annex next door. Fortunately some programmers and others were still around at that time of the morning to help carry out all the tapes. All the tapes were evacuated before the firemen sealed the building. Of the thousands of tapes moved, only one was lost when someone accidentally stepped on it.

I was at home sleeping when I got a phone call from my then superior, Derry Cox, who was Operations Manager. He told me about the fire and told me to stay home, where I could be reached by phone. This was round 5 or 6 in the morning. I heard the news on the radio and immediately left to drive to the site. I met Mikkor and the others and we pondered what else we could do. The firemen let us in so we could verify that my valuable test equipment was also protected from water damage and we were then ushered out. By then the fire was multi-alarm, with dozens of trucks all around the east end of the building. We could do nothing but watch. We then decided to go to the Elm Grill on College Street to get some breakfast and discuss the situation. It was during the meal that we had an “Oh shit!” moment, when we realized that the mainframe computer was water-cooled and it was mid February, and all services in the building would be shut down, meaning no heat, and the water in the computer could freeze and destroy it. We immediately informed IBM of the problem and ensured that they would drain the coolant water as soon as the firemen let people back into the building. Eugene Siciunas, University of Toronto Computer Centre (UTCC) employee