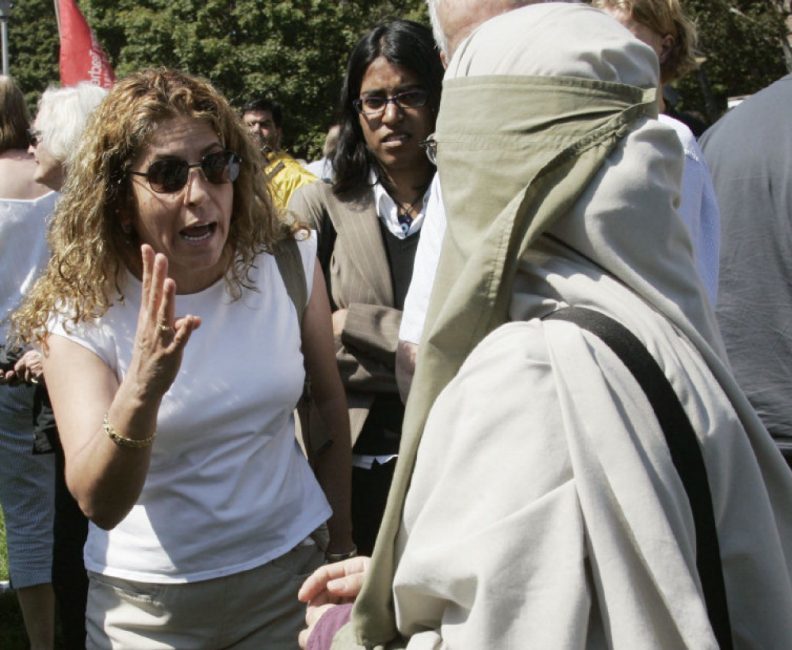 A woman argues with Joanne Siska during a protest against Sharia law in Toronto, Sep. 8, 2005.

In 1991, Ontario lawmakers made it possible for parties in Ontario family court to use a third-party arbitrator to help settle their conflict (Boyd, 3). As a result, people were able to engage in faith-based arbitration (for instance, through a Jewish Beit Din) (3, 40-1). In 2003, public controversy was created when Syed Mumtaz Ali, a Muslim lawyer, announced that he had created an organisation to arbitrate disputes according to the tenants of Islam (3). Some of the public believed that this development was part of a new law, created to allow the practice of traditional Sharia law, which was condemned as a way of oppressing women (Boyd, 4; Simmons). Advocacy groups began lobbying the premier to rescind the legislation (Kerry and Ferguson; Simmons). In response, the government commissioned a report by Marion Boyd (Boyd, 5). She recommended allowing the continuing use of faith-based arbitration, subject to some safeguards (133). Despite these recommendations, in 2005 the Family Statute Law Amendment Act was passed to prevent the use of faith-based arbitration, effecting people of all faiths (Kerry and Ferguson; Ferguson).

The controversy over the tribunals often portrayed women’s rights as fundamentally opposed to the practice of Sharia; however, not all women agreed with this diagnosis. Some argued that it was better that faith-based arbitration be allowed to occur in a public setting, in compliance with regulations, than outside of it (Simmons). Others, such as the Federation of Muslim Women, argued that the ban on faith-based arbitration was xenophobic, and mischaracterised the relationship of Muslim women to their faith (Ferguson). In fact, faith-based arbitration could be an important and successful tool for them (Boyd, 61). On the other hand, there were also Muslim groups who opposed arbitration, arguing that it would pressure all Muslims to settle disputes in a faith-based setting, regardless of what best suited their needs (45). Some also worried that the decisions would be biased towards men, and that this would undermine the secular principles Canada stands on (44-5, 47).

When then-Premier McGuinty ended the practice, he said both that “[t]he notion of binding religious (tribunals) is inconsistent with one law for all Ontarians”, and that “[t]here will be no Sharia law in Ontario” (Ferguson; Simmons). This represents an interesting tension between the neutrality of the state towards religions, which McGuinty’s policy appears to uphold, and the criticism of a specific religion, which McGuinty’s words appear to. It is very easy for Canadians to say in an abstract context that all religions should be treated equally, but this case demonstrates that in practice people feel very differently about a situation depending on which religion is being discussed.

Another tension brought to life by this example is between conceptions of what it means to have freedom of religion. On one hand, there is the negative freedom of not being prevented from practicing one’s particular faith. In the new status quo, religious people are allowed to practice their religion, and consult their religious leader, which conforms to this ideal (Kerry and Ferguson). This aligns with the ideal of secularism of state popular in Quebec. On the other hand, freedom can also require being given the resources to embrace one’s chosen life. By not making accommodations for religious people to consult a family court in a way that they were most comfortable with, it can also be argued that Ontario failed to support their freedom of religion (Boyd, 63).