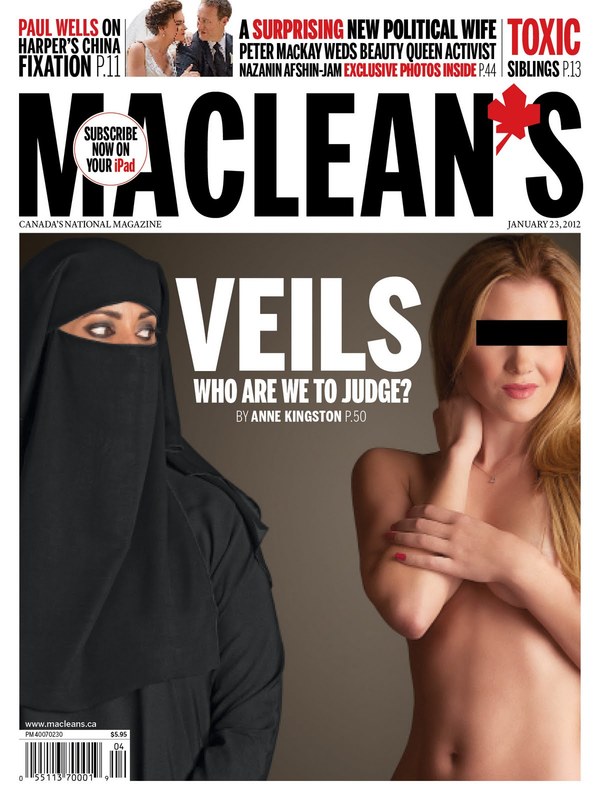 Maclean's Magazine asks us: "Veils: Who are We to Judge?"

This cover of Macleans Magazine provocatively presents the diversity of attitudes towards women’s dress in Canada. The caption “Who are we to judge,” is interestingly both accepting and alienating. It seems as though the reader is including secular Canadians in the “we” pronoun, implicitly “other-ing” the woman choosing to wear a veil.

Quebec schools bar teenagers from wearing the hijab in 1994 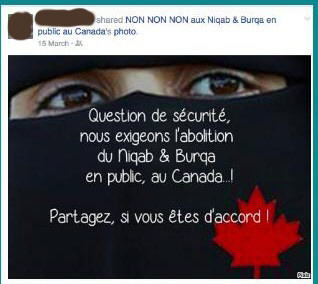 Discomfort with Niqabs and Hijabs

Wearing religious symbols has become an especially thorny issue in Quebec.  Once a bastion of Roman Catholicism, the Quiet Revolution ushered in a new, deeply secular society in Québec.  In 2013, Québec's legislature introduced Québec’s Charter of Values. The Charter, also known as Bill 60, would have banned public employees from wearing “ostentatious religious symbols” to work, or having their faces covered.  Although the bill was never passed, it left a sour note in the province, as it exposed xenophobic pockets of sentiment.  In 2015, an Internet meme developed that illustrated this xenophobia.  It featured the face of a woman wearing a niqab, along with the message (in French): "It is a question of security. We insist on the abolition of the Burkah and the Niqab in Canada!"

Hijabs and Niqabs in Canadian Courts

The Federal Court of Canada has upheld the right of a woman to wear the niqab during an official government citizenship ceremony.  In Ishaq v. Canada, 2015 FC 156, the Appellant, Ishaq had satisfied all elements for becoming a Canadian citizen other than taking the official oath of citizenship.  Crucially, her identity had already been confirmed when she took her citizenship test.  She was concerned that she would be forced to unveil in public, however, at the citizenship ceremony.  Her religious beliefs compelled her to wear a niqab to cover her face while in public.  The Ministry of Citizenship and Immigration's policy manual stipulated that those participating in citizenship ceremonies are required to show their faces during the ceremony.  Ms. Ishaq sought a declaration that this policy violated the Charter pursuant to sections 2(a), Freedom of Expression and s. 15(1), Equality and that therefore the policy should therefore not be enforced (to summarize the arguments simply).  After working through a complex interpretation of various laws, regulations, and policies, Mr. Justice Boswell found in favour of Ms. Ishaq: she was permitted to take the oath of citizenship wearing her niqab. 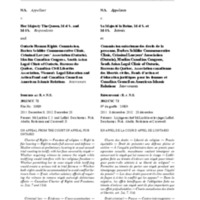 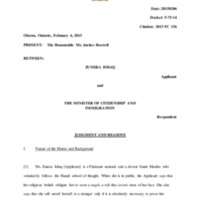