Cricket and the Canadian Identity

To many Canadian immigrants, cricket has always been an integral part of their life. Revered by many English, South Asian and Caribbean communities in Canada, cricket aids in the formation of their cultural identities. Cricket helps dissolve a cultural dichotomy many individuals experience: the choice between ‘their culture’ and ‘Canadian culture’. The artifacts in this section show two things. First, that cricket is not as foreign to ‘Canadian culture’ as one might think. Second, that the ‘zero-sum choice’ between cultures isn’t the only option for new Canadians. Cricket has become a medium for solving this conundrum. 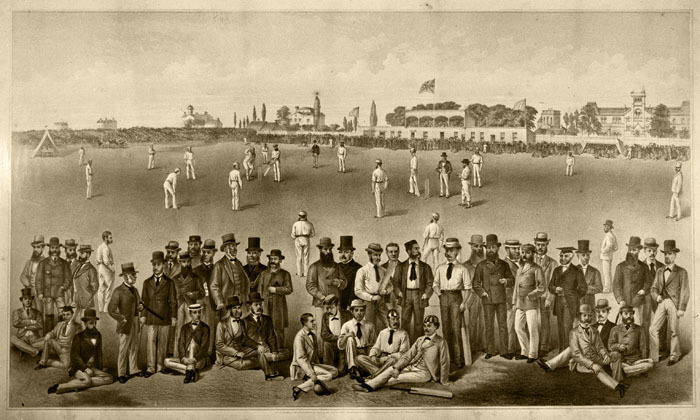 Below is a photo of a program for three matches played at the Toronto Cricket Grounds in September, 1879. 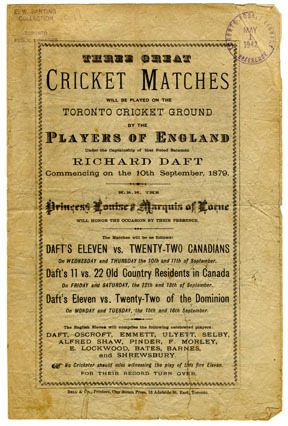 Unknown to most Canadians, cricket was once declared Canada’s national sport by our first Prime Minister Sir John A. McDonald. The Toronto Cricket Club was established in 1827, and will be celebrating its 190th anniversary at the same time Canada celebrates its 150th year of confederacy, making the club older than Canada as a nation!

Cricket and the Meaning of Life

Cricket and the Meaning of Life is a documentary outlining how cricket fosters identity, specifically immigrant and minority communities in Canada. The documentary follows a Canadian team of young cricketers to a match in Trinidad and Tobago, where they discover insight into their multicultural identity within the Canadian context. The trailer for this film is set out below.  The film is available through Canada's National Film Board.

Cricket and the Meaning of Life from Christopher Donaldson on Vimeo.

Cricket and Law: If You Build It, Will They Come?

This short 2012 CBC news clip reports on a proposal to build a cricket pitch on the Toronto Islands. In briefly outlining Canada’s rich cricket history it showcases the intersection between political and legal bureaucracy, Canadian cricket heritage, and Canadian society and culture.