Hockey and the Construction of Identity in Canada

The game of hockey has become deeply inter-twined with Canadian identity.  As Canadians, we proudly claim that we "own" the game.  Canadian mythology invokes hockey. The game unites us.  It cuts across cultural, geographic, and socio-economic lines so that when we play, we are all Canadians...at least according to our folklore. 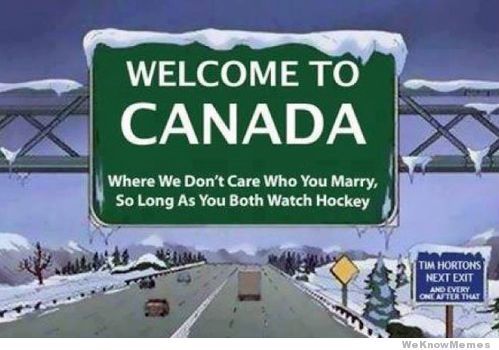 Canadian law reflects how hockey has been used in our national imagination to draw boundaries around the in-group: the "we", as opposed to the "they", the outsiders.  Christie v. York, a 1939 decision of the Supreme Court of Canada, illustrates how race and space become mapped out on our communities and the central role of hockey in determining who is a member of the in-group and therefore allowed to occupya certain space and who is an outsider and thus not welcome.

In this case, Fred Christie, a Black man living in Montreal, sued the York Tavern after the latter refused to sell him a glass of beer. The case involved the freedom of contract, including the right to discriminate provided that there are no laws or regulations that would otherwise forbid such discrimination in the contractual context. (The case occurred well before any Canadian province had enacted human rights legislation.) The Majority of the Supreme Court of Canada held in favour of the York Tavern, rebuffing Christie's claims of discrimination and humiliation.  The current Chief Justice of the Supreme Court Beverly McLaughlin has commented that the Supreme Court of Canada's decision Christie v. York was another disappointing case that only deepened Canada's history of "lawful" discrimination:

Far from being the important step toward equality that many black Canadians had hoped for, the Supreme Court of Canada’s decision in Christie served only to further entrench and perpetuate racial discrimination in Canada.

Christie v. York is no longer "good law", as it has been overtaken by human rights legislation in Quebec (and similar legislation in all other provinces and at the federal level).  The case, however, lives on for other reasons.

Of particular note is the decision of the dissenting judge, Mr. Justice Davis. At the time, any right to be free from discrimination was a collectively held right. That is, rights were not yet conceptualized as being held by individuals. Instead, one would have had to bring oneself within a group that enjoyed special protections or privileges in order to enjoy protections. As a Black man, Christie could have been construed as an outsider in the predominantly white Montreal. Davis J, however, notes a number of important traits about Christie that seem to bring Christie within the "we" group entitled to protection: Christie was originally from another British colony (Jamaica) that was a member of the Commonwealth; Christie had been in Canada for 20 years; he had a good job as a chauffeur; and, crucially, he was a Montreal Canadiens season's ticket holder. Furthermore, Davis J. was under the impression that Christie was attending a hockey game when he went to the tavern for that glass of beer. Christie had in fact been to the tavern before and had been served on previous occasions. The decision of Davis J. paints a picture of a Montrealer who was unfairly denied a glass of beer at a tavern connected to the Forum itself during a hockey game. Perhaps this understanding of who Christie was (an insider, a member of the "we" community) affected Davis J's interpretation of the law. Davis J found in favour of Christie.

One of the most interesting dimensions of the case involves a factual error made by Davis J. Davis J thought that Christie was attending a hockey game. He was not. The incident in question occurred on July 11, 1936. No one was playing hockey at the Forum on that particular night. Instead, there was a boxing match taking place. Boxing was (and arguably still is) a highly racialized sport. There apparently were concerns about racial tensions in Montreal as a result of the boxing match. This may explain why Christie, who had been served beer on other occasions at the York Tavern, was not welcome on this particular occasion. Blacks and whites could watch hockey together, but not boxing. In this regard, the case illustrates how race is mapped out onto the city of Montreal and its social life and how Black men like Fred Christie had to navigate the space in his life, which could alternately be safe or discriminatory, depending on the context.

Eric Adams writes about the legal geography in Christie v. York. He frames Christie as:

...a story of legal geography, of how race and racism took shape and found expression in real space and circumstance – in the neighbourhoods, sports stadiums, and taverns of Montreal. Equally it is a case about how space was employed in legal arguments and judicial reasoning either to support or challenge the legality of Christie’s exclusion. City space, in these respects, functioned as more than simply a backdrop for the factual happenings, but as a necessary character in, and jurisprudential feature of, the case itself. More remarkably still, one of these definitional spaces – the hockey game – was itself an error, woven into the facts by Christie’s own lawyer. It was, in fact, the boxing ring and not the hockey rink that really mattered.

Geography and space intersect with racial and ethnic identities in powerful ways that shape how the law maps onto people's lives on a daily basis.  In Canadian history, Canada was the final stop in the underground railroad. Many People of Colour fled to Canada hoping to find freedom and equality.  While they found the former, equality remains a work in progress.  Viola Desmond, who will soon grace our Canadian $5 note, was fined for sitting in the "white" part of a New Glasgow, NS movie theatre. The legal geography of race and space dictated that white people could sit in the downstairs portion of the theatre, while people of colour were relegated to the balcony.

Race, space, and place still matter in Canada today.  "Carding" is used as a policing technique in many cities; "carding" occurs when a police officer asks an individual for his or her identification even though there is no reason to suspect that the individual is involved with a crime.  The process typically results in a notation being made in policing data that the individual had been stopped by police in a "routine" identity check.  This may cause the individual to be "flagged" in the future as having been stopped by police. The biggest concern with carding in Canada is that it is disproportionately targeted at African Canadian men, among other minorities.  Carding is linked to racial profiling.  In January 2017, Ontario introduced new regulations that prohibit the use of carding, or "random" street checks, as a policing technique.  Some say that this regulation will inhibit police efforts to keep communities safe; others say that the regulation does not go far enough and will perpetuate racialized policing.  The debate over carding is another illustration on how race, space, and place intersect with law: the experiences of people of colour suggest that the extent of their civil rights shifts, depending on where they are at any given moment.