A Conflict of Culture, Leisure, and Law

The Secwepemc Nation’s Battle for Their Land

The Secwepemc Nation, or Shuswap in English, are an Indigenous peoples comprised of 17 bands.[1] What is now called Kamloops BC and the surrounding area is the bands traditional territory predating colonization.[2] “The Secwepemc never relinquished this territory to either the provincial or federal governments by either land claim or treaty. Nevertheless, the provincial government granted a master lease for the mountains to Sun Peaks, a resort that presently encompasses three mountains and hosts over 3,600 skiable acres of terrain.”[3] The Secwempemc have fought through activism, the court system, and onsite protest to fight the unjust use and abuse of their lands. All to no avail. Below are two separate excerpts of text on this case.

First are some hauntingly prophetic excerpts from a statement of complaint issued by Secwepemc Cheif’s to Sir Wilfred Laurier in 1901. They were writing to contest unauthorized settlement on their land:

“[Settlers] have taken possession of all the Indian country and claim it as their own. Just the same as taking the “house” or “ranch” and, therefore, the life of every Indian tribe into their possession. They have never consulted us in any of these matters, nor made any agreement, “nor” signed “any” papers with us. They “have stolen our lands and everything on them” and continue to use “same” for their “own” purposes. They treat us as less than children and allow us “no say” in anything. They say the Indians know nothing, and own nothing, yet their power and wealth has come from our belongings. The queen’s law which we believe guaranteed us our rights, the B.C. government has trampled underfoot. This is how our guests have treated us—the brothers we received hospitably in our house…We have no grudge against the white race as a whole nor against the settlers, but we want to have an equal chance with them of making a living. We welcome them to this country. It is not in most cases their fault. They have taken up and improved and paid for their lands in good faith. It is their government which is to blame by heaping up injustice on us. But it is also their duty to see their government does right by us, and gives us a square deal. We condemn the whole policy of the B.C. government towards the Indian tribes of this country as utterly unjust, shameful and blundering in every way. We denounce same as being the main cause of the unsatisfactory condition of Indian affairs in this country and of animosity and friction with the whites. So long as what we consider justice is withheld from us, so long will dissatisfaction and unrest exist among us, and we will continue to struggle to better ourselves….”— Borrows, John. "Crown and Aboriginal Occupations of land: A History & Comparison." Ipperwash Inquiry, 2005. http://books.scholarsportal.info/viewdoc.html?id=33257

The second excerpt comes from a contemporary article on the current the Secwepemc land dispute and struggle with Sun Peaks and the BC government:

“Undaunted by the provincial court’s duplicity, Secwepemc activists remain committed to resist Sun Peaks’ encroachment on their land in accordance with their own laws. According to spokesperson Niki Manuel, “As Secwepemc, [we] have a duty and an obligation to protect our land.” Manuel, already a victim of state persecution, having been sentenced to 45 days jail time and one year probation for occupying the land in 2002, announced that despite “racist decisions and sentences, we will not be deterred from our duty to defend and protect our homeland. The land is our life and without it our future generations will become landless, leading the Secwepemc to cultural and spiritual extinction.”— McCreary, Tyler. "No Indians Allowed on Aboriginal Territory at Sun Peaks." Canadian Dimension. January 2, 2005. Accessed March 9, 2017. https://canadiandimension.com/articles/view/no-indians-allowed-on-aboriginal-territory-at-sun-peaks-tyler-mccreary.

The Secwepemc grievances and protest of 1901 mirrors the protests of the bands today. Sadly, modern government and non-aboriginal peoples also mirror the colonial past. Institutionalized authorities are committing a grave injustice, while non-indigenous people reap the rewards. For commodified outdoor sport and recreation, a century long form of oppression is being further reinforced and maintained as the status quo. Demonstrating that as much sports can inspire unity, they can also cause spark conflict.

The following pictures are from Secwepemc protests at Sun Peaks. 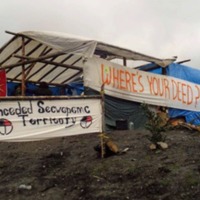 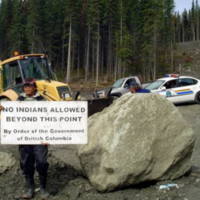 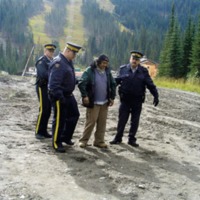