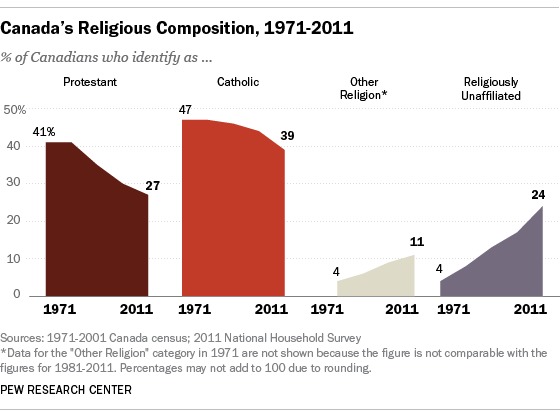 In 2013, Pew Research Center released a demographic report, which uses census data to show how Canadians have religiously identified themselves between 1971 and 2011 (see figure 1, above). The demographic changes Pew has illustrated are the social backdrop against which Canadian public policy and laws relating to religion are decided. The two clearest trends identified by Pew Research’s analysis are the growth of the religiously-unaffiliated, and the increase in people identifying themselves with religions other than Protestantism and Catholicism. While Protestants and Catholics are still in the majority in Canada, over the past four decades they went from representing around 9 of every 10 Canadians, to about 2 of every 3 (Pew).

The numbers also suggest a few explanations of what is driving these changes. While religious-disaffiliation is increasing over time across all age groups, younger people tend to be religiously unaffiliated at higher overall rates (Pew). (That being said, these numbers also vary significantly by region. While in British Columbia 44% of Canadians are unaffiliated, this number is only 12% in Quebec, showing that despite the turn to secularism in the latter half of the 20th century, religion is still deeply rooted in Quebec (Pew).) The increase in Canadians identifying with religions other than Protestantism and Catholicism appears to be correlated with an increase in the percentage Canadian immigrants identifying with other religions upon their arrival. Between the 1970s and the 2000s, the rate rose from 23% to 39%; during this period, it rose from 4% to 11% in the country overall (Pew). Meanwhile, the number of religiously unaffiliated immigrants remained fairly stable, regardless of when they entered Canada (Pew).

It is worth noting that the data being used is not perfect. In 2010, the federal government eliminated the mandatory long-form census, and instead circulated the voluntary National Household Survey in 2011 (Casselman). Therefore, until the 2016 Census results are released, our most recent numbers are not created in the same way as previous years.