Just after the turn of the 20th century, Quebec underwent a major social change known as the “Quiet Revolution”, which was made politically tangible by the 1960 election. Up until this point, the Catholic Church was deeply rooted in the culture of Quebec, as well as the political sphere. Maurice Duplessis, who was Premier from 1944-1959, and was repeatedly taken to court for discriminatory actions against Jehovah’s Witnesses, who were (and remain) a religious minority within Quebec (Seljak). In fact, Supreme Court of Canada cases such as Saumur v. City of Quebec and Roncarelli v. Duplessis were some of the first cases to tackle the idea of individual ‘rights’ in Canad, an idea which would later birth the Charter of Rights and Freedoms (Mullan). After Duplessis’ death in 1959, the Liberal Party of Quebec ran on a platform of change and won the 1960 election (CBC). Their victory was characterised by a political turn from Catholicism to secularism, which had been brewing socially before the election. Secularism became a feature of the subsequent nationalist movement, and continues to be a part of contemporary Quebecois identity (Seljak). 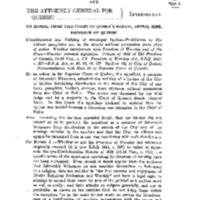 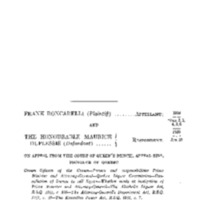 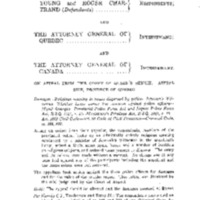 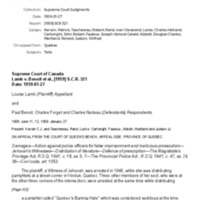