Connolly v. Woolrich was big. Arguably, all modern day cases involving Indigenous rights were premised on this case. In the centre of the case was the existence of an independent indigenous legal system that existed congruently with both the common and civil law traditions in Canada.  The question was, what authority did that Indigenous legal order have?

Connolly v. Woolrich involved a question about the legality of a marriage between a man employed by the Hudson Bay and an indigenous woman. The wedding was not performed by a priest, rather, in accordance with indigenous traditions. The progeny of this relationship later made claim to the man’s estate upon his death; however, the man had married once again in a recognized institution upon his retirement. His widow claimed the previous marriage was invalid and the son was entitled to nothing.

Monk J. disagreed. He reasoned that we must not abrogate indigenous traditions in favour of our own without good reason, rather, that its consideration alongside our own legal traditions is warranted. Ultimately, Monk J. went on the record to say that indigenous rights and customs mattered, to some degree, as much as those of the European settlers. 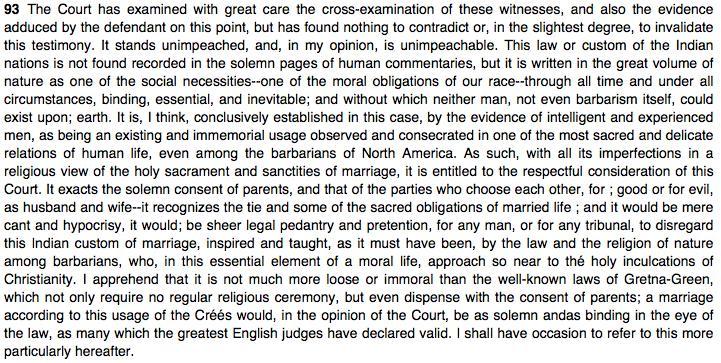